Nov 11, 2017 4:45 PM PHT
Rappler.com
Facebook Twitter Copy URL
Copied
'We owe it all to the food producers of Southeast Asia to protect their rights,' says Elvira Baladlad of Paragos-Pilipinas, a member of international movement La Via Campesina 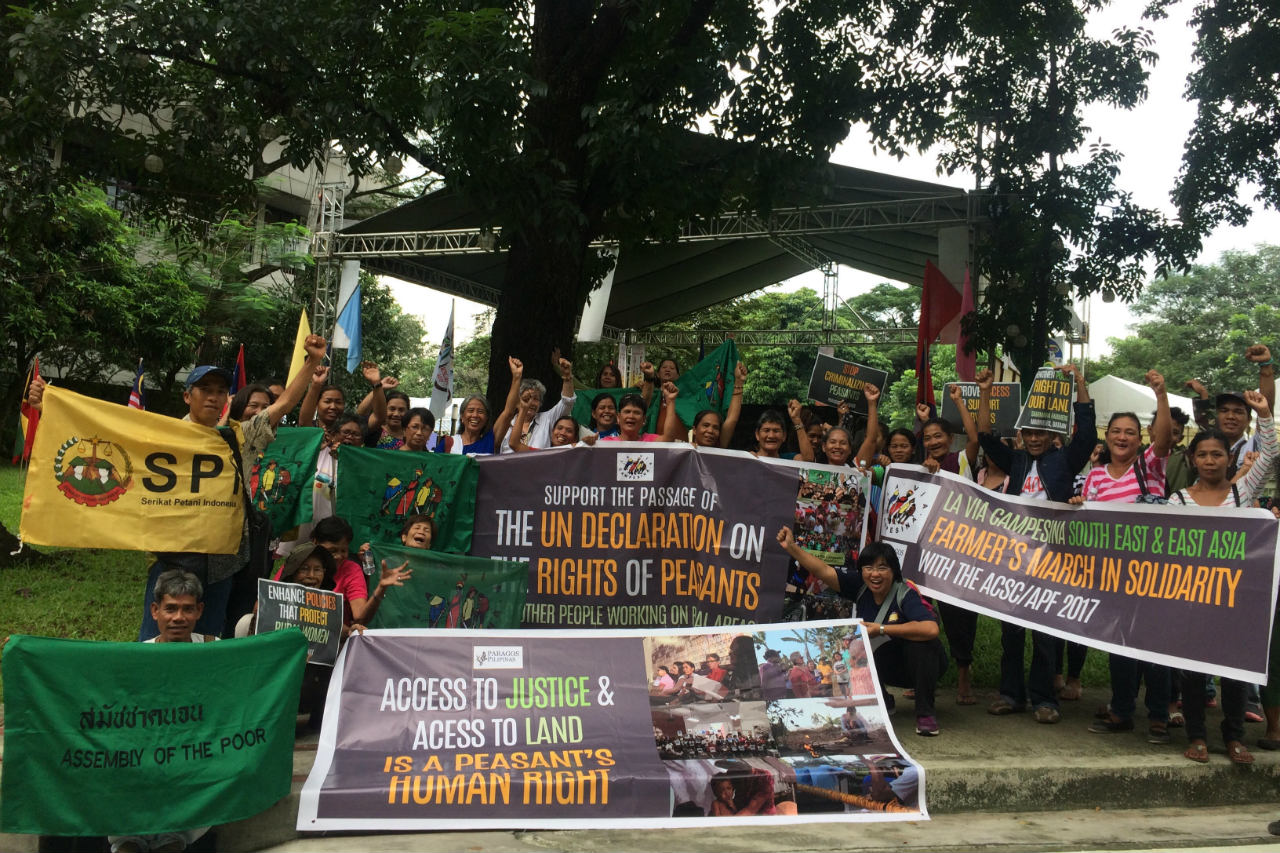 Led by international movement La Via Campesina, around 40 small and landless farmers from the 3 countries, joined by civil society groups, marched to the Commission on Human Rights (CHR) on Saturday.

The group urged Association of Southeast Asian Nations member-countries, whose leaders will meet in Manila for the 31st ASEAN Summit and Related Meetings, to protect and promote the right to land and access to justice of farmers and peasants in the region.

“Peasants’ rights must be secured to ensure that there can be food on every person’s table. We owe it all to the food producers of Southeast Asia to protect their rights,” said Elvira Baladlad of Paragos-Pilipinas, a member of La Via Campesina.

The group also noted that the ASEAN Economic Community that aims  to establish a single market for the region through free trade agreements and large-scale investments have had a negative impact on small farmers and food producers. (READ: Balancing profit with inclusivity key to keeping ASEAN together)

“Land grabbing and land use conversions have become normal phenomena in the countryside. We are losing our lands because of mining, special economic zones, tourism, and real estate. Our rights are continuously and systematically violated,” said Mohammed Ikhwan of Serikat Petani Indonesia.

La Via Campesina called on ASEAN leaders to adopt the United Nations Declaration on the Rights of Peasants and Other People Working in the Rural Areas.

The declaration recognizes peasants’ rights as human rights, which is yet to be adopted in the domestic laws of individual ASEAN countries.

“The lack of adequate policies is a major stumbling block in achieving food security and sovereignty. It is high time that ASEAN governments hear our voices and demands,” said Baladlad.

A study by the Food and Agricultural Organization (FAO) revealed that 70% of the food people consume globally comes from small farmers.

The average age of farmers in the Philippines is 57 years old, which raises the alarm over the possible future gap in human resource requirements needed for agriculture. (READ: Wanted: Younger farmers in PH)

The march came before the arrival of ASEAN leaders and other world leader for the ASEAN meetings to be attended by the 10 leaders of the ASEAN member-states and their dialogue partners. (READ: PH to mark end of ASEAN chairmanship with summit, grand celebration)– Rappler.com