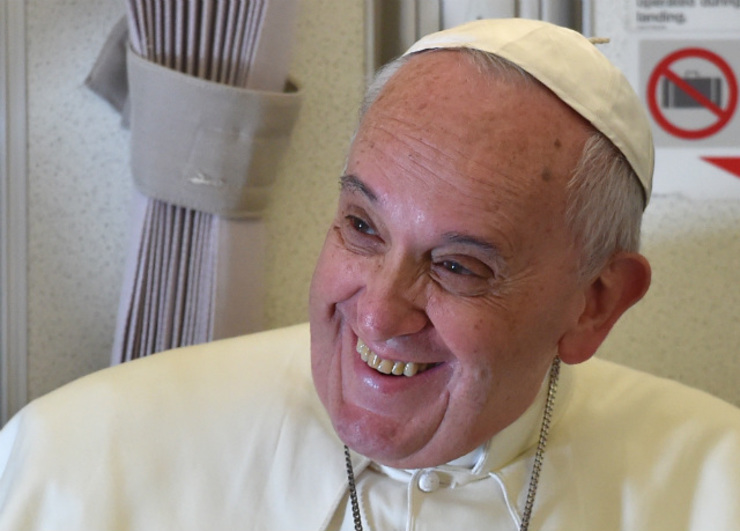 MANILA, Philippines – The Catholic Bishops’ Conference of the Philippines (CBCP) denied on Wednesday, January 21, that Pope Francis after his Philippine trip “made the rather unseemly remark that Catholics breed like rabbits.”

“What the Pope did say was that some Catholics mistakenly believe that to be Catholic, we ought to breed like rabbits – and prior to using that simile, he knew that it was harsh and so said ‘excuse the expression’ – but it was apt and it brought home the point,” CBCP president Lingayen-Dagupan Archbishop Socrates Villegas said in a statement titled, “It Is Responsible Parenthood! Not about Rabbits!”

“Let us leave the rabbits in peace,” Villegas said.

In a text message to Rappler, he said the CBCP was reacting to the headline used by the Philippine Daily Inquirer (PDI), the Philippines’ most popular newspaper, in its banner story on Wednesday. The headline said, “’Don’t breed like rabbits.’”

“I can believe that the Pope would talk about responsible parenthood but for the Pope to say we should stop breeding like rabbits, that’s an invention because that statement I heard already during the RH debate,” Sotto said in an interview quoted by the Inquirer.

What the transcript says

Like Sotto, Villegas urged Catholics to read the transcript of the Pope’s interview aboard the papal plane on Monday, January 19.

The official transcript provided the Vatican quotes the Pope as saying: “Some believe that – excuse the expression – to be good Catholics we must be like rabbits. No. Responsible parenthood. This is clear, and for this reason in the Church here are matrimonial groups, experts in this. I know of many, many legitimate ways to achieve this.”

The Pope also told reporters: “I think that 3 is the number of children per family that the experts say is correct to maintain the population, 3 per couple. When there are fewer than this, there is the other extreme, which we see in Italy where I have heard – I do not know if it is true – that from 2024 there will not be the money to pay pensioners.”

Villegas stressed that the Catholic Church “has always taught that it is a Catholic obligation to be responsible about parenthood.”

He explained: “Births should be planned rationally by both parents who must always remain open to new life, but who must also take into consideration their physical, financial and emotional capacity to raise children. It is not correct for a Catholic to assume the attitude: ‘Come what may!’”

“This is traditional Church teaching that the Pope was reiterating, and it should be especially relevant to us Filipinos who are grappling with population issues,” he added.

These population issues involve the RH law, which, in recent history, is the most contentious issue between the Philippine government and the Catholic Church in the Philippines. The law, among other things, funds the distribution of contraceptives, which the Church opposes in favor of natural family planning.

The Philippine Supreme Court announced on April 8, 2014, that it upheld the law despite an appeal lodged by its critics. Villegas then urged RH law critics to “move on” as Catholics should stop being an “RH-law-reactionary group.” – Rappler.com