Nov 15, 2016 10:01 AM PHT
Rappler.com
Facebook Twitter Copy URL
Copied
Globe customers can get first dibs on an exclusive pre-sale on November 20 at all SM Tickets outlets 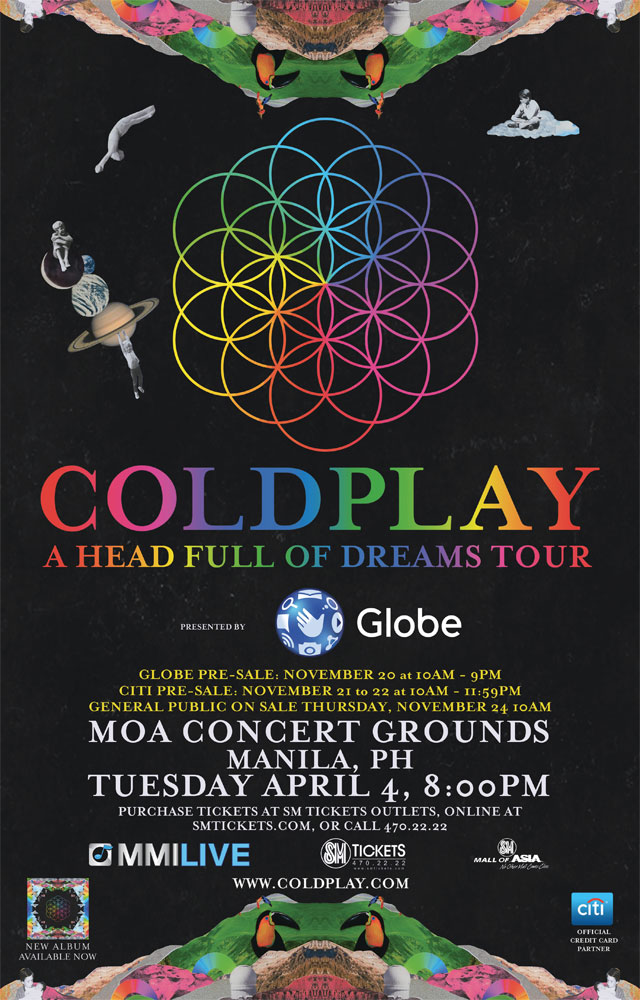 On their social media pages, Coldplay today announced a run of Asian stadium shows for their acclaimed A Head Full Of Dreams Tour, including the band’s first ever concerts in Taiwan, the Philippines, and South Korea (they last played Japan in 2014 and Singapore in 2009).

Here are the announced tour dates:

Since March of this year, the A Head Full Of Dreams Tour has played to 2.5 million people across Latin America, the US and Europe. The show was created by the band alongside celebrated production designers Misty Buckley and Paul Normandale. The tour reaches Australia and New Zealand in December.

The record A Head Full Of Dreams has sold more than 5 million copies since its December 2015 release, spawning the hit singles “Adventure Of A Lifetime,” “Hymn For The Weekend,” and “Up&Up,” with more than a billion YouTube video views between them.

Tickets for the Asian dates go on sale on November 17 (Seoul), November 18 (Singapore and Tokyo) and November 24 (Manila and Taipei). Manila tickets will be available through SM ticket outlets, http://smtickets.com, or via 470-2222. (READ: Coldplay in Manila: Ticket prices, concert date revealed)

Coldplay’s A Head Full of Dreams World Tour in Manila is presented by Globe. Globe customers can get first dibs on an exclusive pre-sale on November 20 at all SM Tickets outlets. To join the pre-sale, fans just have to text GLOBECOLDPLAY <ticket type> to 2363 on November 18 starting 9 am. Customers will receive a reservation code which they need to present to purchase the tickets at any SM Tickets branch on November 20. For details on the exclusive pre-sale, visit www.globe.com.ph/GlobeColdplay.