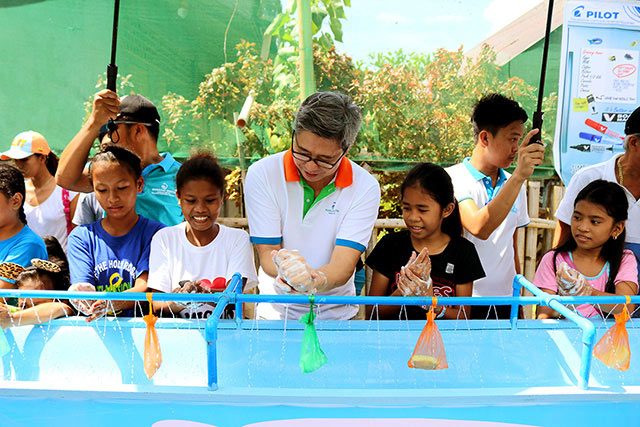 [Editor’s note: The following is a sponsored post by the Manila Water Foundation.]

Over 11 million Filipinos from different parts of the country were encouraged to commit to proper handwashing during the month-long Global Handwashing Day (GHD) campaign, which urged individuals to integrate the habit into their lifestyle as a means to create a healthier future.

Throughout October, Manila Water Foundation (MWF) spearheaded the celebration of the 2017 GHD, an international campaign that aims to educate the public on the importance of proper handwashing in creating a healthier future through the prevention of communicable diseases.

MWF, the social development arm of the Manila Water group of companies in the Philippines, led the GHD celebration by organizing eight events in key locations in the country, which were participated by more than 25,000 individuals.

During the culminating event held at the Ati Village in Malay, Aklan, MWF President Geodino Carpio shared the importance of holding this campaign in ensuring the health of Filipinos, especially the children.

(As many philosophers have shared, our future lies in our children. With this, we are grateful that we are all gathered here today to teach our kids about the importance of proper handwashing in preventing the spread of disease-causing germs.)

His message is in line with this year’s theme, “Our Hands, Our Future”, which was also echoed by MWF’s celebrity advocate for proper handwashing, Bettina Carlos.

“I support this advocacy because it’s actually the small and simple things that many people do not know that have big effects, such as proper handwashing. This can actually prevent children from having diarrhea and other diseases. As a parent, I am very intentional in teaching this small habit to my child because it will really affect her future,” she shared.

MWF launched the campaign at The Mind Museum last month, followed by several more events held in Laguna, Pampanga, Quezon City, Rizal, and Taguig. In these events, participants were engaged through interactive lectures and games that taught the seven handwashing steps and its importance, and the critical times when proper handwashing should be practiced.

Aside from events, MWF amplified its reach by launching online and digital campaigns. On Facebook, over 70,000 individuals have participated in the online quizzes and discussions, while more than 1.7 million Filipinos were informed about this life-saving advocacy through Viber public accounts.

MWF also reached out to approximately 230,000 motorists through an educational AVP that was played on MMDA’s electronic billboards along EDSA for the whole month of October. The same effort was launched in Market! Market!, where over 20,000 movie goers were reached.

Lastly, Globe, one of MWF’s constant partners, also helped in information dissemination on proper handwashing by sending text blasts to its more than 9 million subscribers.

With the support of its partners Green Cross, Pilot, and Philusa Corporation, MWF was able to successfully hold the 5th year celebration of the GHD.

The month-long campaign was also made more fun and exciting for the participants through products provided by Nescafe and Toy Kingdom.