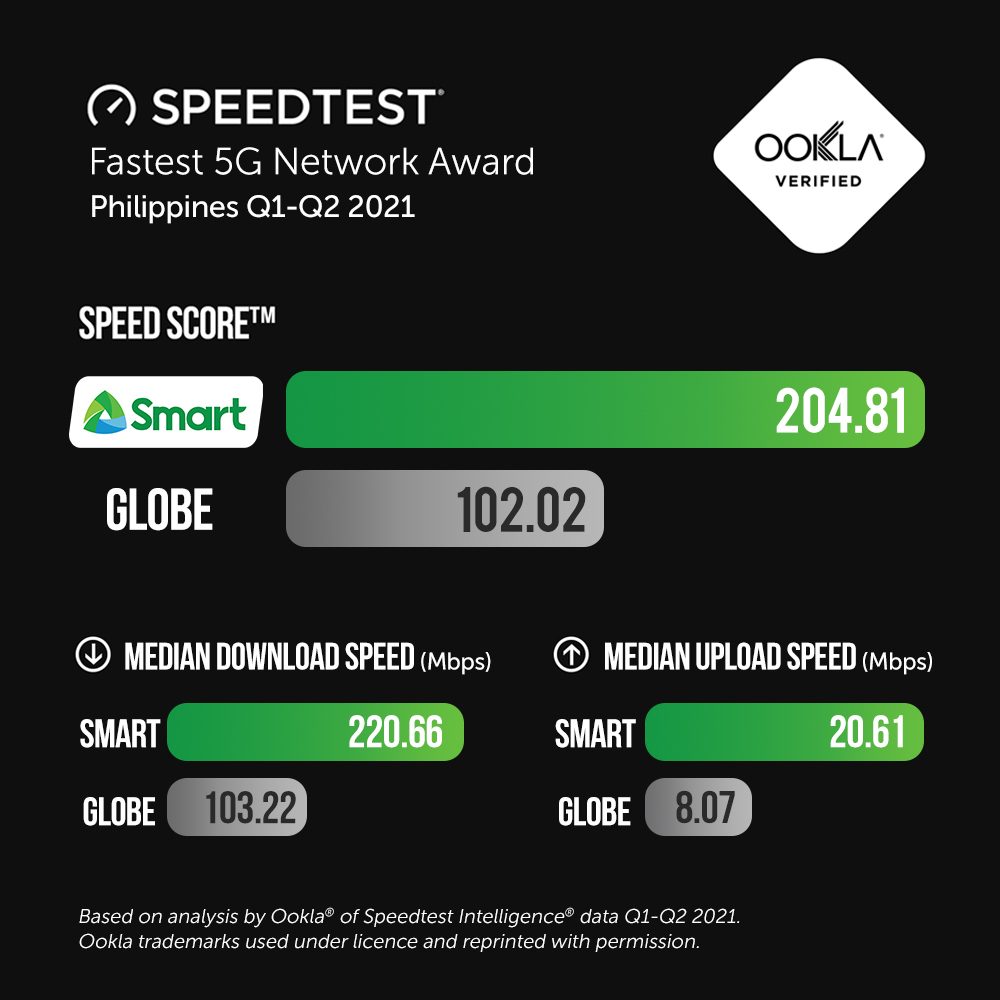 Editor’s note: Smart won the Fastest 5G Mobile Award in the country with a Speed ScoreTM of 204.81. This was based on user-initiated 5G tests taken with Speedtest in the Philippines for the period Q1-Q2 2021. Below is their press release.

PLDT wireless unit Smart Communications, Inc. (Smart) is the country’s fastest 5G network in the Philippines for the first half of 2021, according to the latest report by Ookla®, the global leader in internet testing and analytics.

Smart won the Fastest Mobile Network Award with a Speed ScoreTM of 44.70, a big leap from the previous year where Speed ScoreTM was at 24.99, based on 4,949,931 user-initiated tests taken with Speedtest in the Philippines for the period Q1-Q2 2021.

Meanwhile, in the newly released Fastest 5G Mobile Award report, Smart notched the top place in the country with a Speed ScoreTM of 204.81, posting median download and upload speeds of 220.66 Mbps and 20.61 Mbps, respectively based on 237,142 user-initiated 5G tests taken with Speedtest in the Philippines for the period Q1-Q2 2021.

Speedtest AwardTM for top providers in speed is determined using a Speed ScoreTM that incorporates a measure of each provider’s download and upload speed to rank network speed performance. To determine Speedtest Awards winners for mobile networks, Ookla assesses the average of test results taken using Modern Chipsets. Modern Chipsets include all mobile tests, regardless of connection technology used, as long as they are taken on devices that are identified as being capable of achieving the fastest speeds available in a market. After this filtering has taken place, Speed Score is applied as outlined above to determine the best speeds available in a country.

“Speedtest Awards, presented by Ookla, are reserved for an elite delegation of network operators that have delivered exceptional internet performance and coverage within a market. It is our pleasure to present Smart with two awards for Fastest 5G Mobile Network and Fastest Mobile Network in the Philippines. This recognition is testament to their exceptional performance in Q1-Q2 2021 based on Ookla’s rigorous analysis of consumer-initiated tests taken with Speedtest,” said Doug Suttles, CEO of Ookla.

“Smart continues the drive to make the latest 5G technology available for more people in more areas. It is encouraging to see how these awards reflect actual customer experience and are indicative of how our overall data service experience is progressively improving,” said Mario G. Tamayo, Head of Technology at PLDT and Smart.

“These measurements are just among the tools we use as we strive to deliver a world-class experience to our customers nationwide, and elevate overall internet speeds in the Philippines,” Tamayo added.

This level of performance has been enabled by Smart’s mobile network, including its 5G network, now fired up in more than 4,000 sites nationwide. Supporting Smart’s network is PLDT’s most extensive fiber infrastructure, now at over 511,000 kilometers as of June.

Initial data included in Ookla’s country reports showed that Smart’s 5G speeds are way ahead in key areas nationwide like Manila, Cebu City, and Davao City, with Smart posting download and upload speeds that are faster compared to its nearest competitor in these areas.

According to the National Telecommunications Commission (NTC), the government’s all-out support in expediting the release of LGU permits required for the ramped-up improvement of telco infrastructure has helped increase internet speeds in the country.  As of July 27, 2021, PLDT and Smart have secured more than 25,000 fixed and wireless permits since the government fast-tracked approvals for telco firms last year.

These include the Anti-Red Tape Authority (ARTA)’s issuance last year of the Joint Memorandum Circular fast-tracking the issuance of permits and the Department of Public Works and Highways (DPWH)’s recently issued Department Order No. 29 (DO 29), which allows telecommunications companies to occupy a portion of the government Right of Way (ROW), subject to prescribed conditions. DO 29’s issuance also assists in ensuring the timely maintenance of PLDT’s fiber infrastructure as well as Smart’s cell sites. – Rappler.com

* Based on analysis by Ookla® of Speedtest Intelligence® data 2018 through 2020 and Q1-Q2 2021. Ookla trademarks used under license and reprinted with permission.