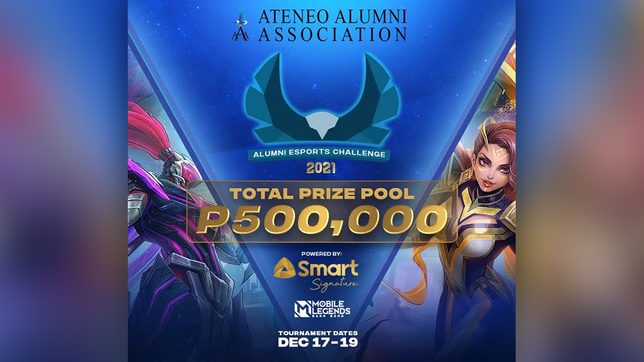 The Ateneo Alumni Association (AAA) has teamed up with the country’s leading mobile services provider and staunch esports advocate, Smart Communications, Inc. (Smart) for the organization’s first ever Mobile Legends: Bang Bang tournament entitled Alumni Esports Challenge 2021, to be held from December 17 to 19, 2021.

Open to all members of the AAA, the Smart-hosted esports tournament is part of the fundraising efforts of the organization for its scholarship program.

To join, AAA members may register their team at https://esports.ateneoalumniassociation.org with a joining fee of P500. Each team must have six members with at least three current AAA members. Each team may also have only one professional esports player.

“We are excited to partner with Smart for the very first Alumni Esports Challenge 2021, a Mobile Legends tournament created for the academe, as part of our fund-raising efforts for our scholarship program. We are also looking forward to bringing this to a bigger arena in the future and perhaps even include other schools and universities in the spirit of healthy competition and sportsmanship,” said Dennis Cariño, President of the Ateneo Alumni Association.

Smart’s support for AAA’s first ever esports tournament builds on its longstanding thrust to promote esports as a legitimate form of sports that highlights values such as hard work, discipline, and teamwork, as well as showcase the players’ unique set of strategy and skill.

“Our groundbreaking partnership with the Ateneo Alumni Association for their first ever Mobile Legends tournament underscores the growing mainstream appreciation of mobile games as esports bring people together and celebrate the values, talents, and skills of players. We wish the organization the best as we closely work together in bringing the best mobile gaming experience for all the participants,” said Jane J. Basas, SVP and Head of Consumer Wireless Business for Smart.

Since 2013, Smart has been a big supporter of the Philippine esports community by partnering with game creators and esports tournament organizers here and abroad, and actively playing a role in the Philippine Esports Organization (PESO), the official National Sports Association that governs and develops esports for the over 43 million gamers in the country. Smart is also currently in partnership with Mobile Legends: Bang Bang creator Moonton for MPL Tournaments, as well as Eplayment for Liga Adarna, the first female league esports competition.

To serve and delight Filipino gamers, Smart has also launched GIGA Games, which offers 2 GB every day for seven days to access their favorite mobile games like Mobile Legends: Bang Bang, plus 2 GB of open-access data for only Php99. Smart and TNT subscribers can register to GIGA Games via the GigaLife App or by dialing *123# and choosing GIGA GAMES.

Smart offers the best mobile gaming experience powered by the country’s fastest and most reliable 5G mobile network, as reported by Ookla, the global leader in mobile and broadband network intelligence.

To date, Smart has already fired up around 6,400 5G base stations nationwide making it the country’s first, fastest, and widest 5G network. Smart has also reasserted its dominance as the Philippines’ fastest mobile network for the fourth year in a row, based on analysis by Ookla of tests taken with Speedtest® covering the first half of 2021.
To know more about the Ateneo Alumni Association, visit https://esports.ateneoalumniassociation.org/ and its Facebook and Instagram accounts. To know more about Smart’s latest offers, follow its official accounts on Facebook, Twitter, and Instagram. – Rappler.com