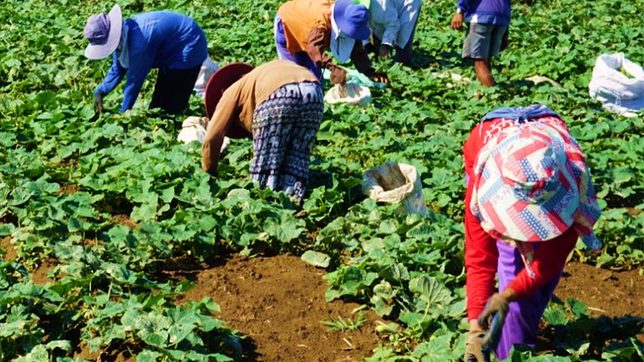 Facebook Twitter Copy URL
Copied
The world we live in today won't be able to sustain the human population in the future. What can we do about it?

At this year’s World Food Day celebrations, United Nations’ World Food Programme executive director David Beasley said that the mission to end world hunger is facing a number of unprecedented challenges. “We’ll only succeed in ending hunger if we ensure our global food systems are fit for the twenty-first century.”

The conversation on food inequality and insecurity began in the late ‘70s and was initially focused on providing marginalized societies with access to better nutrition. Since then, the dialogue has shifted to include other factors that feed into the issue, whether economic, social, or environmental.

The reality we’re facing isn’t solely about food access any longer but also the disadvantages brought about by conventional farming. There’s a feedback loop in our current system that worsens climate change and production sustainability served with decreasing nutrition density on the side.

As a global brand used by 2.5 billion people on a daily basis, Unilever is taking a stand on the issue, expressing this as an opportunity to rethink farming as we know it and look into alternative systems such as regenerative agriculture.

The issue with conventional farming is how much of nature is taken away in the process. Conventional farming heavily relies on pesticides and herbicides, while also doping plants with chemical fertilizers. Although this practice was initially seen as a way to increase yields in shorter periods of time, studies have shown that it is a short-term solution with long-term repercussions that are worsened by monocropping, another standard practice in farming.

Monocropping is the process of planting one kind of product on large patches of land, then leaving the soil dry once harvesting is completed. This effectively kills the quality of soil, thus further increasing the need for fertilizers when it’s time to start planting again.

In essence, conventional farming is continuously masking dead soil meant to support vegetation. This also releases a lot of carbon into the air, and the United Nations estimates that agriculture as an industry releases about 15 to 20% of total emissions in the world.

Regenerative agriculture, on the other hand, is a practice that borrows principles learned from organic farming. It focuses on keeping the soil “alive” and rich with microbes.

Part of this practice includes crop rotation, which is planting a series of vegetation in the same area across different growing seasons. Doing so reduces the need to rely on a single set of nutrients all year round, and will keep the soil alive by supporting microbes underneath. It also includes using organic fertilizers and compost material that feeds more life into the soil, and removes the need for chemical pesticides and herbicides.

This practice not only maintains the nutrition density in crops and vegetables but also sequesters a lot of carbon, significantly reducing greenhouse gases emitted. Some researchers even believe that regenerative farming can reverse global warming and climate change.

It is a practice that goes beyond the borders of the farm itself and allows a more natural ecosystem to take its course.

Unilever has long since acknowledged that the planet is in crisis, and even created the Unilever Sustainable Agriculture Code in 2010 which pushed for improvements across its supply chain by using 11 indicators: soil health, soil loss, nutrients, pest management, biodiversity, farm economics, energy, water, social and human capital, local economy, and animal welfare.

But they admit that the company’s efforts haven’t been enough and that there needs to be a systemic change, which is why it is adding a new set of guidelines to their existing code called  Unilever’s Regenerative Agriculture Principles.

These new principles include:

The big wins so far

By adopting new principles, the global brand has started to look more closely at each step in their supply chain, working together with their network of farming experts to identify which practices will bring the most overall positive impact, and hopefully regenerate nature beyond the farm. They call these initial steps their Lighthouse programs.

In Iowa in the US, they started working with soy farmers and soy oil suppliers to switch over to regenerative practices and use “cover crops” to keep the soil healthy after harvest season. They have also started to work with plantations in East Malaysia where a number of endangered species are found.

Locally, Unilever’s brands present in the Philippines have also made great strides in sustainability. Knorr, one of its largest food brands in the country, has a 19-year old program that educates families about nutrition. This program has also successfully integrated tamarind farmers into their sustainability principles, benefiting over 800 smallholder farmers. They are also part of the Pilipinas Kontra Gutom (PKG) program, a multi-sectoral movement that works towards sustainable solutions on food availability and access.

As Unilever looks inward to implement these changes within its own supply chains, the brand and its stakeholders are also aware that regenerating nature requires concerted efforts from government agencies, NGOs, and other institutions. So as they work on becoming more sustainable themselves, they are encouraging others to join them and adopt similar practices to fix the climate crisis and solve food scarcity across the globe. – Rappler.com