Detours from home: Walking new streets, joining raves all from my room 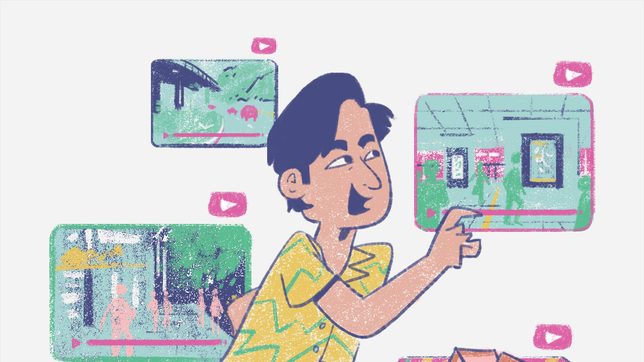 When I was younger, I used to obsess over the concept of hikikomori. Hikikomori is, by definition, a group of social recluses who have isolated themselves at home for a long period of time. Growing up, I carried this fantasy of one day leaving everything behind and living alone in a small house in the woods—equipped with a fast internet connection no less.

I was “introverted”, according to personality quizzes, and a homebody (according to me), and so the idea of cutting ties with my circles, resisting the pressures of working at an 8-5, having kids, and moving to a faraway land was a recurring dream.

I kept thinking about how silly these fantasies were when the pandemic suddenly came, and the usual course of my life had stopped. In the months before coronavirus entered the scene, I was just starting to become more outgoing, I’d been making new friends, and my mood depended on how often I got to walk to the nearby park. The abrupt, hard lockdown came as a shock, and we were all forced to turn to our screens just to get a semblance of what was left behind.

Funny enough, the quarantine compelled me to try something I never enjoyed before: traveling. Of course, nationwide restrictions made it impossible for me to actually go anywhere—so I went on YouTube walking tours to Akihabara in Japan, Chiang Mai, and even Ho Chi Minh in Vietnam. These streets were unfamiliar to me, but there was a sense of familiarity in the sounds of busy streets and distant chatter that brought me comfort despite being in a foreign place.

This was just a level-up version of a hobby I came up with recently, where I’d go on Google Street View to walk along Session Road in Baguio and pretend I wasn’t melting under the heat of the sun in Laguna. I would play music that reminded me of the cold air—sometimes it’s Mabuhay Singers’s “Ayug Ti Kailokuan,” sometimes it’s videos of Mongolian throat singing—while I took photographs (read: screenshots) of sceneries. It doesn’t beat the experience of physically having to walk the uphill streets of Baguio’s roads, but weirdly enough, I’d feel this sensation that I actually hiked for half an hour, my body’s desperate attempt to forget about the present.

In another surprising detour, I also joined my first ever rave in quarantine. Infinite Summer, initiated by Club Matryoshka, was a 24-hour online music festival and fundraiser built and hosted on a Minecraft server. I only experienced the event through their Twitch stream, but I witnessed an expansive, breathtaking, and interactive world that was a perfect respite for people like me who’s locked up at home. Even though I was alone in my room, I felt the vibrant energy of other the other people dancing to Pamcy, Meh Shua, Mark Redito while I spun along the disco lights beaming from the starmaker I bought online.

As if that wasn’t already amazing enough, the festival simultaneously hosted an art exhibit entitled “Internal Server Error” inside the Minecraft server! I was giddy about this because it was curated by my friends at Para://site Projects, and it felt surreal seeing the works of people I knew, and whose exhibits I went to before the lockdown began. It wouldn’t take you more than a minute to encounter signs that read “#JunkTerrorBill,” which helped the venue feel safer amidst a dark, uncertain time.

It was something that I so strongly desired ever since I got depressed over lockdown fever: to be in a room of like-minded individuals. To be in a space that didn’t feel like I had to restrain myself because there was no one to talk to, or because I was surrounded by other people who thought the only way to react to this pandemic was “to shut up” and “be thankful.” These spaces have become harder to find even on the internet, where a lot of discussions are clouded by fake Facebook accounts or people grandstanding about issues. The way these spaces are built continues to divide us, despite these platforms’ promises to unify people from all over the world.

While I surveyed news updates in neighboring countries who were already declared “covid-free,” I came across Audrey Tang, Taiwan’s Digital Minister who had a hand in the successful handling of the cases in their country. When asked about her job description, one of the lines she would throw at you is this: when we see “virtual reality,” it’s our aim to make it a “shared reality.” True enough, the internet isn’t separate from our real lives. If anything, our slow internet connection at home is just another manifestation of the state’s consistent neglect. And so again and again, we go back to the streets. – Rappler.com

Mac Andre Arboleda is the managing editor of UPLB Perspective and a graduate student at the University of the Philippines Los Baños focusing on communication and the Internet. Visit his website at asshulz.net or tweet him at @asshulz. He’s from San Pedro City, Laguna.