When I was in college, I hated the word “enrollment.” For me, it signifies sleepless nights, thinking of ways to pay a 5-digit tuition fee in half a year.

While my mother’s company was generous enough to grant me a scholarship, it still wasn’t enough to get us through the down payment. She had to borrow money from her friends  – something that was hard for me to swallow. We never had to ask for money before.

So when I saw this photo posted by Ryan Russel Reyes, a fresh senior high school graduate from the Philippine Christian University (PCU), memories came rushing through.

In an interview with Rappler, Ryan shared the story behind his photo which already has more than 80,000 reactions, and 16,000 shares since it was posted last June 5.

It was his graduation day. When they arrived at the Philippine International Convention Center (PICC), his father, Hector Reyes, a taxi driver, told him: “Nak, pasensya na wala pa akong pera eh, kain sana tayo sa labas. (I’m sorry, son. I wanted to treat you to Jollibee but I don’t have money).

Ryan recalled that as soon as he assured his father that it was all right, he turned his back to keep himself from crying. It pained him to hear his father apologize for being unable to give him a graduation treat.

Ryan understands their situation. Coming from a broken family with other siblings who also need financial support, getting a graduation gift or eating out is the least of his concerns.

I, too, had to go through financial difficulties in school. The anxiety of having a costly school requirement and wondering if you will be able to pay it is overwhelming.

In Ryan’s case, while his father borrows money from friends, he also looks for ways to support his own education. Aside from being a freelance makeup artist, he also accepts events hosting jobs to pay for his school fees. He budgets and saves what is left from his allowance to help ease their expenses.

But what made Ryan’s story extra special is the kind of relationship that he has with his father. “Never po naging problem yung pagiging gay ko (Being gay was never a problem),” he said. His whole family knows and accepts his sexuality. He said that he and his father are close and would often bond through cooking.

Last June 15, Ryan finally got the chance to celebrate his graduation and father’s day with his dad courtesy of Jollibee at the PGH Taft branch. In a message he gave to his guests, he thanked his father for all his efforts and hard work to help him finish Senior High School. He also shared how he’s grateful to have parents who accept him as he is.

Ryan dreams of lifting his family out of poverty. He promised his father that he’ll do well in college to become a journalist or a TV and radio broadcaster someday. 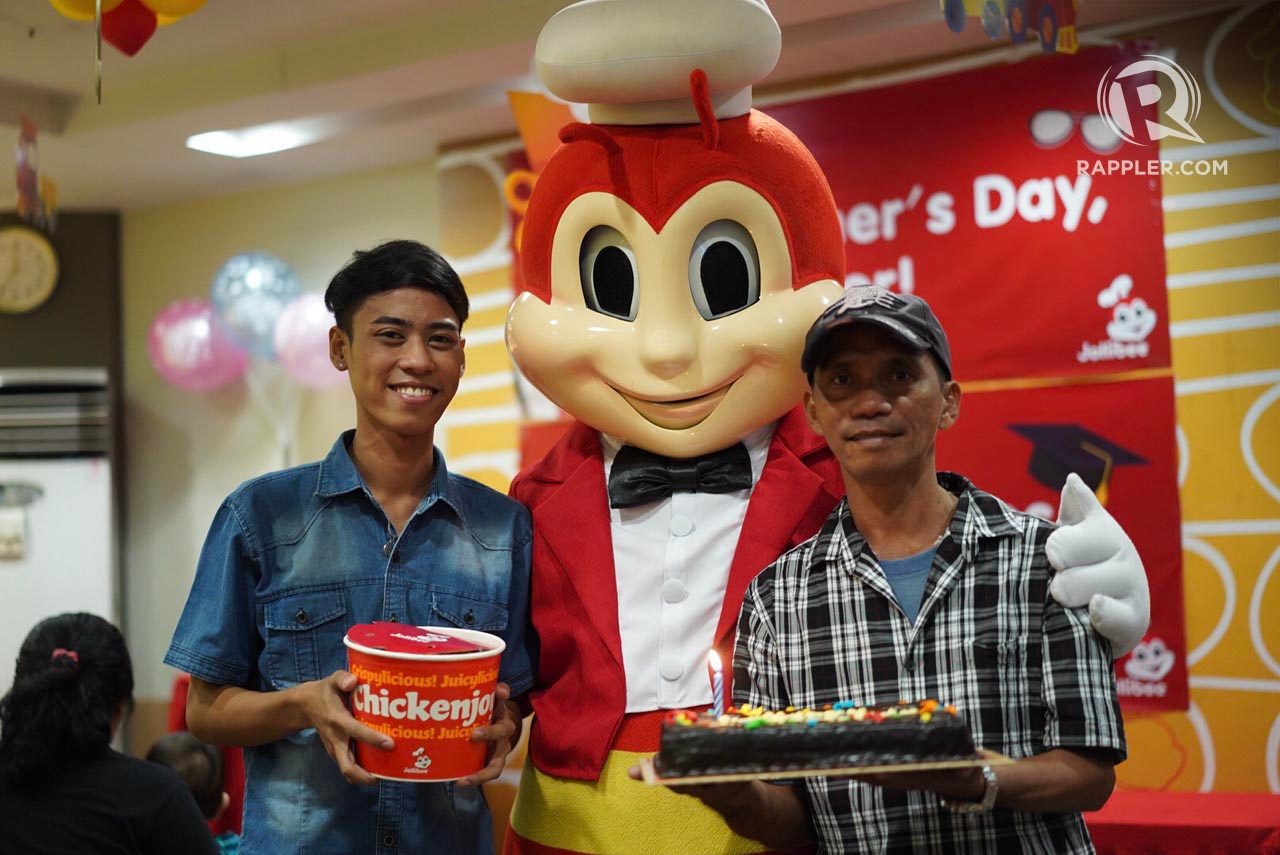 “Huwag na huwag susuko. Laging mong isipin kung para kanino mo ginagawa ang mga bagay (Never give up. Always think of why you do what you do),” he said. “Isipin mo yung pangarap mo at yung mga taong naniniwala sa iyo (Think of your dreams and the people who believe in you.)”  – Rappler.com

#GoodRap is a weekly column that aims to feature lighthearted yet meaningful stories from here and around the globe. We hope this provides an oasis for anyone who wants to take a quick escape from the gloom and doom of the everyday world.