How a mother and her sons move forward from grief This is the first of a three-part series, each one an in-depth look at the story of a family featured in Tang’s latest video series that showed the different faces of the modern Filipino family.

MANILA, Philippines – The Pedros were a picture of a young, happy family.

Rachelle and her husband, Paolo, were blessed with two beautiful boys who carry the name of their father: Johann Paolo, 8 and Miguel Paolo, 3.

The couple worked in the pharmaceutical industry. She was a corporate relations manager for events while he was a medical representative.

Despite having full-time jobs, Rachelle and Paolo were hands-on parents. Between the two, Paolo was stricter while Rachelle was more nurturing.

Although he was strict, Paolo was also a loving, doting family man. He would cook for his family and take them on staycations. He would take his kids out to go swimming and biking. He also loved giving his wife a relaxing treat after a stressful day of mounting events.

For more than seven years, Rachelle and Paolo went on to live a happy family life everyone is dreaming of.

Until one day, at only 39 years old, Paolo suffered a heart attack.

Suddenly, there was no one to take Johann and Miguel for play dates and vacations. No one to relieve Rachelle of her stress after a tiring day at work.

In the first few months following Paolo’s death, Johann refused to show any emotion. Rachelle thought it was probably because his dad used to tell him that boys don’t cry.

But after some time, Johann started opening up. He would look for his dad and say that he misses him. Even now, Johann would still ask Rachelle about his dad: what dish did he like cooking best? How did he and Rachelle meet?

“Hanggang ngayon naman pinag-uusapan namin… As much as possible, lagi kaming nag-uusap para kung ano ‘yung tanong niya, maa-address ko. Ako ‘yung sasagot (We still talk about it. My focus is on them because they need my attention now more than ever… As much as possible, we talk so that I’ll be the one to directly answer his questions),” she says.

Family as pillar of support 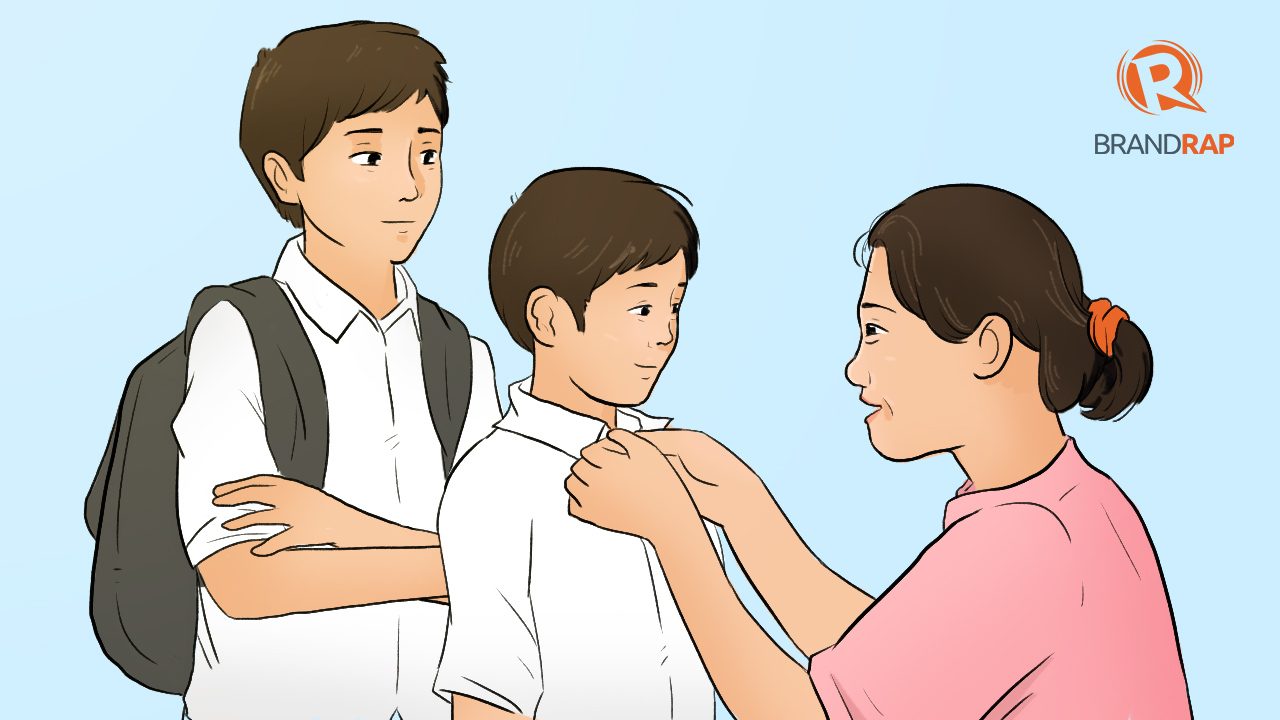 When Paolo passed away, they decided to leave their house and move back to Rachelle’s parents’ home. They knew they needed all the help and emotional support from their families at the time.

Rachelle, now 41 and a stay-at-home mom, has also taken on Paolo’s role, particularly in instilling discipline in her children.

“Iniisip ko lagi na boys ‘yung mga anak ko so kailangan mas tough ako sa ibang bagay. Hindi kailangan lahat binibigay (I keep in mind that I have two boys so I should be tougher when it comes to certain things. That I shouldn’t give them everything they want),” she shares.

Aside from their families’ support, Rachelle and her children coped by spending more quality time together and communicating constantly.

Johann, especially, is makwento (chatty), so Rachelle has no trouble talking to him about anything.

(What’s good about Johann is that he’s always asking questions. In the morning when I prepare and send him to school, he already asks questions and tells me stories non-stop. Sometimes he’s curious to know how his papa and I met… There are times when all he asks about is his papa… Maybe he doesn’t want to forget his memories of his papa.)

Their conversations would continue all the way through just before bedtime.

(After saying his prayers, he would tell me about his day… He’s chatty. So it’s easy for us. It’s easy for me to know if he has a problem in school or if there’s something he wants to do because he tells me everything.) Two years after Paolo’s death, Rachelle is just focused on raising the kids well and securing their future. Someday, she hopes to move back to the house that she built with Paolo when Johann and Miguel are older. And even go on trips just like how she and Paolo used to.

“Hindi naman in a year or two masasabi mo na matatapos na, eh. Everyday, coping ka pa rin. And siyempre, marami kaming nami-miss. Pero siguro nasa acceptance [na kami] (You can’t say it’s all over in a year or two. You still cope with [the loss] everyday. Of course, we miss a lot of things [about Paolo]. But I think we’re already in the acceptance stage),” she says.

To those who share the same experience as hers, Rachelle offers these words of comfort:

“Live your life to the fullest and spend your time with people you love. Life goes on. Bad things happen but life goes on. Enjoy life.”

Faces of the modern Filipino family

Tang recently launched a video series that showed the different faces of the modern Filipino family, with each video tackling a different family subject matter.

Rachelle Umali-Pedro and her son Johann’s story was about the loss of a parent.

In the video, Rachelle engages in a conversation with Johann on losing their father as she makes him a glass of orange juice. As simple as this act may be, it still gave them an opportunity to sit down, talk, and share a valuable moment during the day.

Through a Facebook poll conducted by Rappler and Tang, we asked our readers about their own stories of loss and how they coped with it.

Majority of our respondents (62% out of 146 votes) said that they did so by being together and moving forward as a family, followed by giving oneself and their kids time to cope individually (23%) and by talking about how each other felt as soon as possible (15%).

In a separate post on Instagram, we asked how parents have taught their children about grief. Some found comfort through prayers.

Meanwhile, others advised opening up to family members and even experts to ease the emotional toll on them.

Losing someone you love is never easy, especially if it’s a parent or a partner in life.

No matter how much time has passed, the pain never really goes away. And when we lose someone, we truly make an effort in bringing the family even closer.

A loss is an eye-opener: it teaches us to not take the time we spend with our loved ones for granted. It’s a time when family members need to be especially open and supportive of one another so that bonds are strengthened.

It’s only then that the family can rise to this challenge and move forward together. – Rappler.com

All illustrations by Janina Malinis