DUMAGUETE, Negros Oriental – If the Philippines aims to reduce its carbon emissions by 70% by the year 2030, it must monitor its total greenhouse gas (GHG) emissions, and take steps to actively reduce them.

But despite existing agreements and policies toward GHG reduction, the country is still a net carbon source, according to experts. This means that major sectors – such as agriculture, transportation, and energy – continue to emit carbon at increasingly harmful levels.

Even natural sinks which absorb carbon – such as soil, plants, and forest cover – are turning into carbon sources because of man-made interventions such as resource gathering, land use conversion, and farming.

"Carbon emissions from sources are a measure of environmental, resource and community destruction, particularly by extractive industries that harm or disturb sinks. Mitigation strategies must associate carbon emission with impact, to have more complete basis in deciding on mitigation strategies," said SIBAT Executive Director Victoria Lopez.

The organization held a forum dubbed as a “State of Nature Assessment” last August 9 at the Silliman University, Dumaguete City. 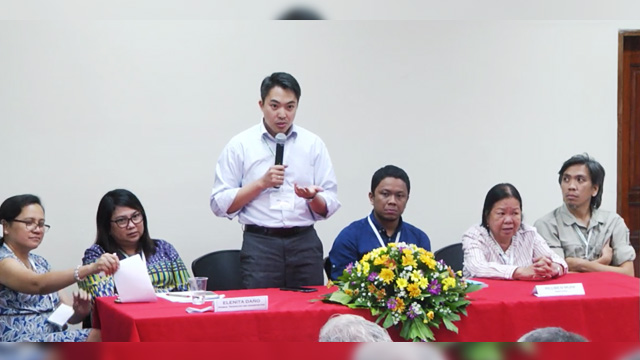 CALL FOR CHANGE. Advocates, experts, and industry leaders unite in urging the government to prioritize climate change mitigation and adaptation.

In this “Green SONA,” leaders from civic organizations presented data and offered an assessment of what’s happening in the country from an environmental perspective. Representatives from local and national government units then outlined the current administration’s plans to address climate change and its impact on food security, livelihood, and energy stability.

Based on data submitted to the Intergovernmental Panel on Climate Change (IPCC), carbon emissions in the Philippines come primarily from the following industries: energy, agriculture, industrial processes, and waste.

"These inventories were made following IPCC. Our question is, have these inventories counted or included the realities in the country? Every sector has situations in the Philippines that we need to examine," said Victoria Lopez.

The energy sector remains the country’s biggest source of carbon emissions. That’s largely a result of the country’s reliance on coal-fired power plants – 19 are now running, and 20 more have been approved for future operation by the Department of Energy.

According to Reuben Muni of Greenpeace Philippines, the Philippines actually has sufficient renewable energy capacity to offset the energy demand on coal. “But only 10% of this potential energy (from renewables) is utilized,” he said.

Jay Joel Soriano of the Energy Development Corporation warned that the sector’s carbon emissions will increase by 141% if we continue to largely depend on coal.

Coal is an ideal baseload energy resource because it is cheaper to generate and supply is abundant. But according to Soriano, policy support for renewable energy can actually negate these perceived benefits. Geothermal power plants, for example, can generate cheaper power than solar or wind, and can run 24/7 as well.

Muni reiterated that coal is not cheap because of its hidden costs and harmful effects to public health.

The agriculture industry continues to be both a source and a carbon sink. Neth Dano from the Action Group on Erosion, Technology and Concentration emphasized that aside from looking at the usual sources of emission – such as livestock – there is also a need to examine other agricultural practices, such as using synthetic fertilizers. These substances release harmful components that affect the atmosphere. 70% of synthetic fertilizers used in the country are also imported – which means they also generate carbon emissions from energy and transport use. “There’s no data in the inventory that shows how much energy is being used in the agriculture industry,” Dano said.

Existing government-sanctioned policies also violate the Solid Waste Management Act, which specifically bans the incineration of trash. For example, the Department of Environment and Natural Resources provides cement factories incentives to burn mixed waste as “alternative fuels” for cement kilns. “There’s a lot of money going into the country, that puts a premium on violating the law,” said Healthcare Without Harm’s Paeng Lopez.

The IPCC inventory further identifies land use and forestry as carbon sinks, but according to Victoria Lopez, poor implementation of projects such as the National Greening program is doing more harm than good. She said that in the forestry sector, “there is a need to examine the emissions generated by extractive industries and palm oil plantations.”

“We need at least 54% forest cover to maintain ecological processes in the country,” said Belinda De La Paz, CEO of Haribon Foundation. But right now, she pointed out that the Philippines’ actual forest cover is still 30% below the ideal.

“If we really want change, we can do a lot better than these numbers,” Paeng Lopez said.

National and local government officials presented their plans toward environment protection and sustainable development, under the guidance of the new administration.

Negros Occidental’s Provincial Environment Managing Officer, Ramon Peñalosa, shared how the province used political will to take down environmental violators, adopt a concrete solid-waste management program, and promote organic farming among barangays. Their next goal is to build a network of 93 local conservation areas that can be protected by other local government units.

DENR, under the leadership of Gina Lopez, will now actively “shift from a regulatory to a development role,” said Al Orolfo, the department’s regional director for Negros Island. DENR promises to involve civic organizations more in the development of on-ground policies and programs, such as the “revival” of Laguna Lake.

The Department of Agriculture will focus on upping its efforts to guarantee food security for Filipinos, in preparation for severe drought or floods that will affect crops and food production. DA secretary Manny Piñol promised to raise the country’s food buffer stock to 6 months. He also expressed interest in promoting organic farming – environmental advocates are lobbying to institutionalize this, as it would greatly reduce the agriculture sector’s carbon emissions. However, Piñol also said that if the market has no demand for organic produce he cannot dictate farmers to adopt it. “It’s not gonna happen right away,” he said.

The forum attendees were able to engage in dialogue with the department heads to air their concerns on existing policies and offer their recommendations.

The Green SONA ended with participants urging the government to pass the National Land Use Act and to support the shift to organic farming and renewable energy. – Rappler.com