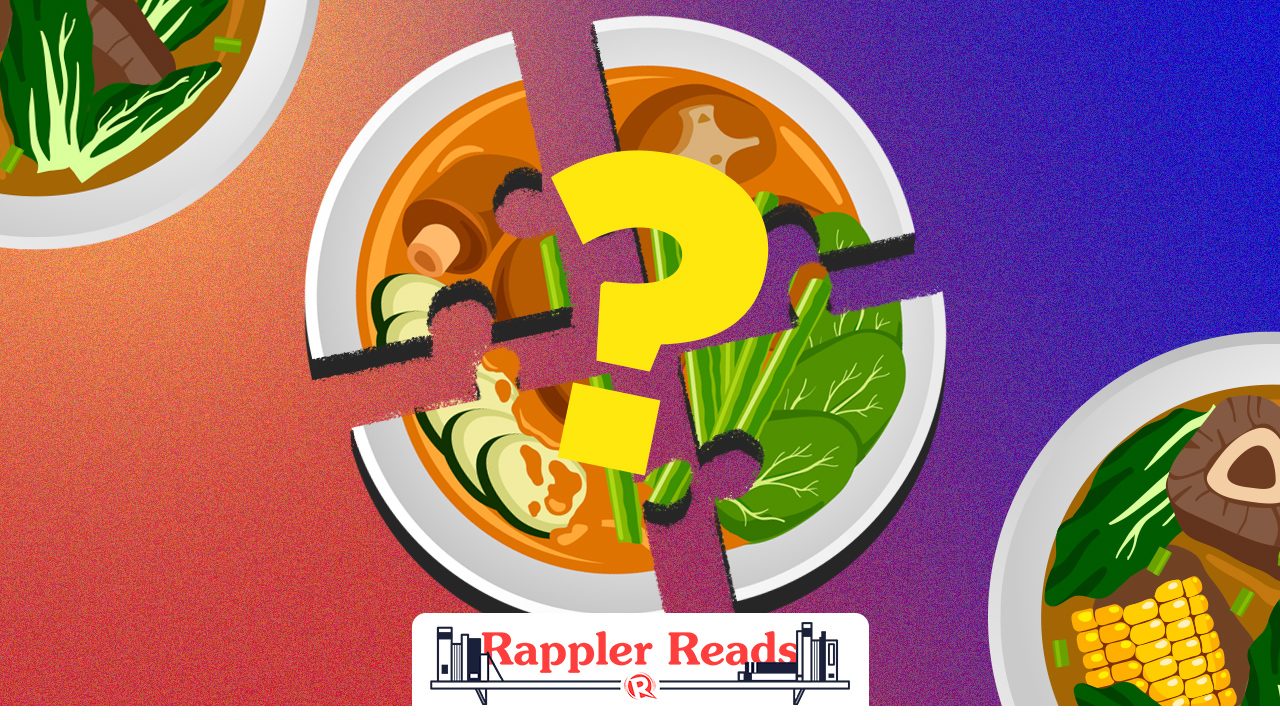 Facebook Twitter Copy URL
Copied
Who or what gets to decide which lutong bahay recipe reigns supreme?

Kimchi sisig fried rice was one of my favorite creations when I first started to cook. I would chop the kimchi, pan fry it in butter with a dash of sesame oil, pour in leftover sisig, throw in soy sauce, nori, an egg, and as much kimchi juice as I could get out of the bottle. And finally, add cold rice into the fragrant melange. I find the sharp acidity and firm crunch of the Korean dish mixed with the fatty, liquid seasoning-drenched Filipino staple a wonderful marriage, with the white rice tying the knot on the indulgent union.

I often find myself gravitating towards these “fusion recipes,” as the YouTube cooking vloggers – my culinary teachers – label them. You could never really go wrong with the myriad of oyster sauce, soy sauce, ginger, and fish sauce combinations. I rarely strayed from Asian cuisine, but I never ended up trying a conventional Filipino dish.

Perhaps it was from the perennial disappointment I felt from the one time I attempted to cook adobo for my family’s lunch (with a recipe off a soy sauce bottle sticker). I tried to add my own flavor by mixing in some unorthodox ingredients. My parents took one sip of the sabaw and felt amused that it turned out more like chicken teriyaki.

I had always felt a little insecure about my unstructured choices of flavor. Add to that, cooking a Filipino dish worthy of your tito’s or lola’s palette can be quite intimidating. Every family always has a generational dish they tout as the best in the country, with each recipe holding a secret heirloom sauce or technique. But with such gastronomic varieties from family to family (or even Filipino to Filipino), how do we know which recipe is “authentic”?

Would my adobo-turned-teriyaki be considered a Filipino dish, since it still uses the very ingredients taught in basic textbooks and sauce packets? Does my kimchi sisig fried rice hold too much Korean flavor to still be considered Filipino?

Cook and decorated food writer Ige Ramos tackles similar discussions in his 2019 book, Dila at Bandila: Ang paghahanap sa pambansang panlasa ng Filipinas. The book is written in Filipino, and contains essays, photographs, and heirloom recipes revolving around the author’s home province of Cavite. Dila at Bandila reimagines the question of what Filipino food is, and rather asks how food becomes Filipino. In an attempt to answer this, Ramos tackles how geographic identity, or terroir, molds Filipino cuisine, along with its history.

Buy “Dila at Bandila” on Shopee for P195

Despite a short page count of 112, the book is chock-full of thought-provoking ideas on classic Filipino dishes and ingredients like sinigang, suka, or kinilaw. One example is his exploration of the Filipino spaghetti. Despite its obvious genesis in Italian pasta, our sweet, hotdog-filled rendition has become a beloved Filipino dish synonymous to special occasions. Ramos contemplates on this evolution as a subversive form of decolonization, as the recipe incorporates ingredient substitutions that are accessible to the everyday Pinoy.

Ramos also dives into discourses of standardization in our archipelagic nation. With our individualistic, tantiyahaan cooking tendencies coupled with cultural differences across ethno-linguistic groups, how should Filipino recipes be written and disseminated? Why should the Tagalog adobo be considered the national dish, when it may be less prominent in Visayas in Mindanao?

In reading Dila at Bandila, I was able to discover a gastronomic map guided by history and interwoven cultures thanks to Ramos’ words. I learned about the different shades of Cavite’s adobo, from the atsuete-tinted adobong pula, to the turmeric-flavored adobong dilaw and the adobong puti which is made without soy sauce.

I saw how our colonial history led from the Spanish paella to a markedly Caviteño recipe like General Trias’ arroz valenciana, which, according to Ramos, is virtually similar to Pampanga’s bringhe all the way in the north.

More importantly, I came to the conclusion that Filipino food is inherently a mixture of terroir, history, cultures, and most of all, an ineffable Filipino instinct. In Dila at Bandila, Ramos says, “Aking natuklasan na katangi-tangi ang ating pagkain dahil hindi ito nakasentro sa kusinero kundi sa kumakain (I have discovered that our food is unique because it is not centered on the cook, but rather the eater).”

Our eating habits of instinctively creating our own dipping sauces during a meal, or eyeballing measurements mid-sauté, might actually be what embodies Filipino cuisine itself. So now, I think more kindly of my affinity to experiment with different flavors like kimchi with sisig, or sugar in adobo. After all, curiosity is only natural for a Filipino in the kitchen. – Rappler.com

Hotsilog, kinalas, Filipino spaghetti among Worst Dishes in the World, according to Taste Atlas