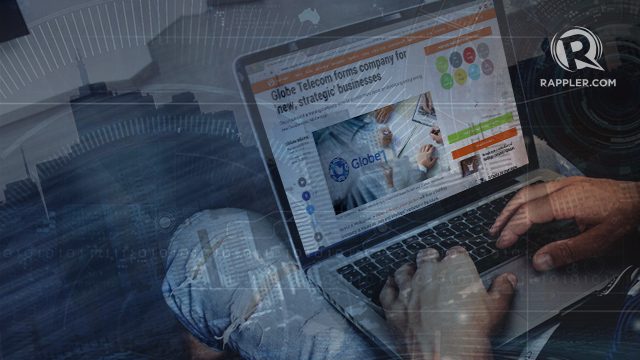 Facebook Twitter Copy URL
Copied
ICT has the power to positively affect every aspect of our lives. But there are hurdles that we as a nation need to overcome first

MANILA, Philippines – We have been dubbed as the social media capital of the world, and the numbers continue to prove it.

Based on the UN’s State of Broadband report, in 2015, 39.7 percent of Filipinos are able to use the Internet. This is a slight increase from 2014 figures, although our global ranking remains fixed at 106 out of 191 countries.

We are the nation known for “breaking the Internet” by pushing hundreds of millions of tweets about a noontime show segment. But we need to look beyond the numbers and the record-breaking hashtags. Filipinos’ increasing reliance on information and communications technology (ICT) means that we now have a huge wealth of data in our hands. It has significantly altered the way we work, learn, play, and live.

What if ICT access can be enhanced, and even used for doing something good? What if it can be used to improve every single facet of our lives: from governance, to education, and business productivity?

In the mid-2000s, the information technology-business process outsourcing (IT-BPO) industry took the Philippine economy by storm. Year on year, call centers posted tens of billions of dollars in revenue. As call centers and BPO offices improved their infrastructure and expanded their reach, many Filipinos were able to land stable, thriving jobs and grow their careers.

Today, the Philippines has one of the most dominant call center industries in the world, leapfrogging its close competitor, India. According to a roadmap laid out by the IT and Business Process Association of the Philippines (IT-BPAP), annual revenues for the IT-Business Process Management industry could more than double from $9 billion in 2010 to $25 billion in 2016 — equivalent to 10 percent share of the global market. Analysts also expect the industry to exceed the $48 billion-revenue mark by 2020.

The Philippines has one of the most dominant call center industries in the world, leapfrogging its close competitor, India. Annual revenues could more than double from $9 billion in 2010 to $25 billion in 2016 — equivalent to 10 percent share of the global market.

Unsurprisingly, other sectors and businesses have also benefited from the leverage that the call center industry brought to our shores. ICT innovations, such as higher broadband speeds ranging from 20-45 mbps for voice and as high as STM-1 155 mbps for non-voice, were introduced through the BPO sector’s rigorous global requirements. Now, these demands are slowly become mainstream in other industries like banking, education, the government, and even at home.

The continuous growth of IT-BPO industry, and the Philippine economy in general, would not be possible without a robust ICT infrastructure.

In 2011, The Department of Science and Technology launched the Philippine Digital Strategy (PDS). It has a vision of:

“A digitally empowered, innovative, globally competitive and prosperous society where everyone has reliable, affordable and secure information access in the Philippines. A government that practices accountability and excellence to provide responsive online citizen-centered services. A thriving knowledge economy through public-private partnership.”

The PDS highlighted four areas that would benefit from ICT development: 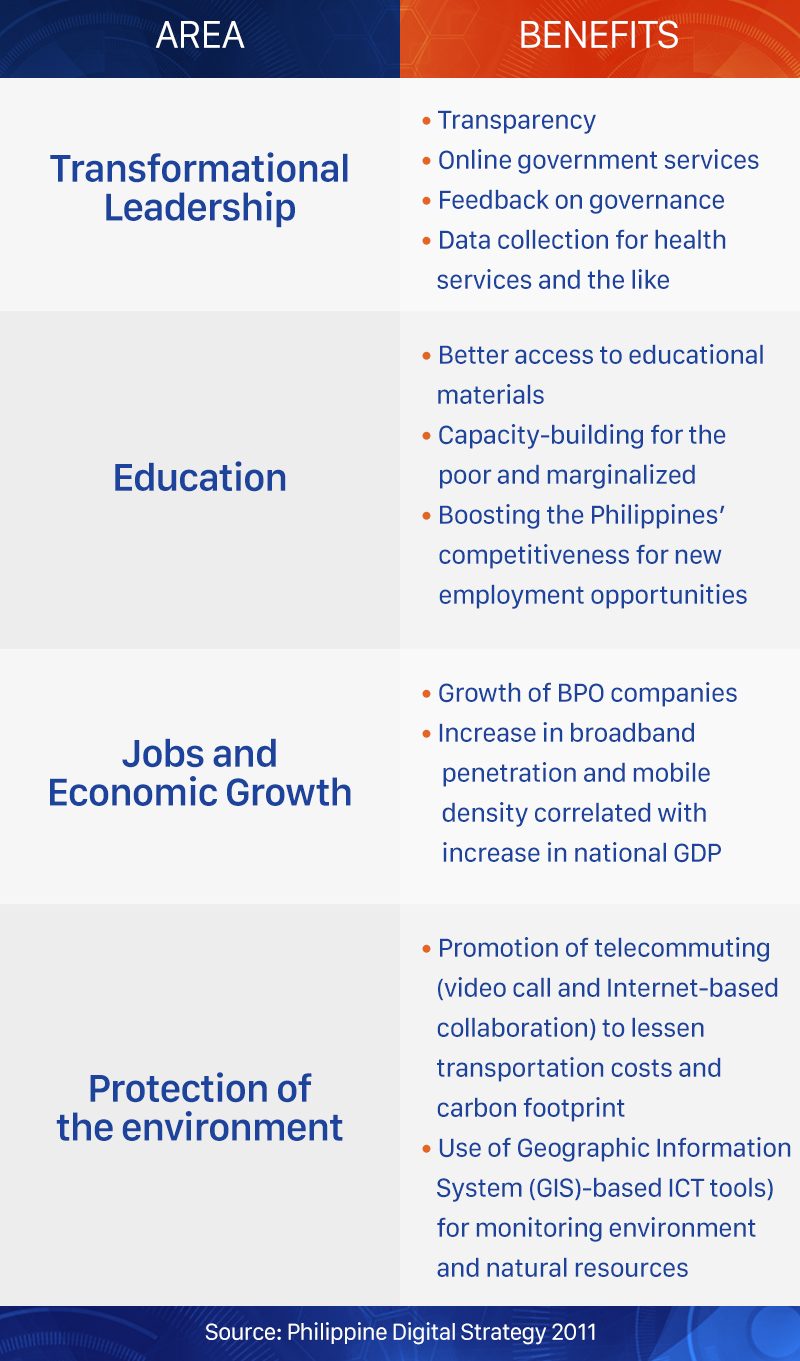 Indeed, the public sector would benefit the most from a strong and effective ICT strategy. But the government cannot function without a thriving business sector. Private corporations also need to develop their ICT strategies to thrive in the demanding and ever-evolving market.

“All industries locally should benefit from improving their ICT capabilities to improve competitiveness and/or their quality of service,” says Cocoy Claraval, Vice President for Product Development and Management in Globe Telecom.

The Philippines has been in the global spotlight for its impressive economic growth. We recently hosted the APEC summit, and we are the incoming chair of the ASEAN for 2016. These events hold huge economical potential for our country, as well as a chance to fulfill the prediction that we will be Asia’s next tiger economy.

“ICT Integration brings a lot of opportunities for businesses to expand and be recognized regionally,” adds Claraval. “It opens the market for our clients to compete with Asian counterparts, thus the need to be more robust in their operations. Our partners, through our solutions, will be more efficient and cost-effective so that they can reach a wider market and compete well with global players.”

To make that happen, we need a strong and reliable ICT infrastructure to address the demand for improved information flow and connectivity. 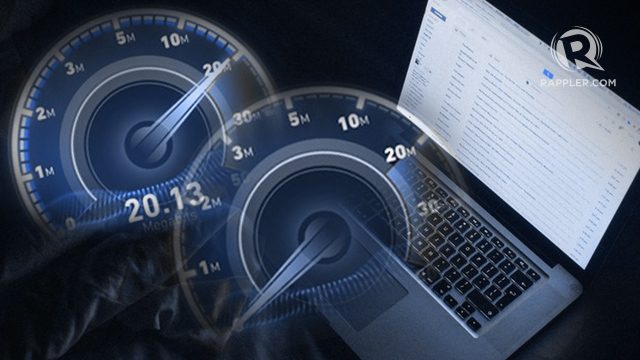 Despite these exciting prospects, the reality is that the state of ICT in the Philippines leaves much to be desired.

According to a 2014 report that was presented by the Department of Transportation and Communications, weak infrastructure, limited broadband access, and insufficient regulatory powers from the government all inhibit full, inclusive growth of ICT development in the Philippines.

Much of the proposed solutions, such as incentives for small businesses to move into ICT, and convergence laws to improve ICT services, are still in development or proposal stages.

The PDS outlook emphasizes that in terms of competitiveness, Filipinos have the skills, as evidenced by our thriving BPO and IT industry. However, there is a marked digital divide, because those who will benefit most from ICT – namely the poor and the marginalized – still cannot even afford an entry-level phone with a basic data plan, much less a desktop or laptop with Internet access.

In terms of competitiveness, Filipinos have the skills. However, there is a marked digital divide: those who will benefit most from ICT still cannot even afford an entry-level phone with a basic data plan, much less a desktop or laptop with Internet access.

The local cost of Internet access remains one of the highest in the world, yet in terms of broadband speed, the Philippines’ ranking lags at 3.7 mbps, compared to the global average of 24.2 mbps. But according to a quarterly report released by Akamai, the current average connection speed in our country has actually increased compared to the previous year with a 14% improvement on average connection speed and 19% on average peak connection speed. As the government pushes forward with its plans to make nationwide free Wi-Fi a possibility, private Internet service providers would be expected to improve prices and speeds for paying customers. In the long-term, things could get better.

Be empowered, be informed

The government is calling on ICT providers to make their services more affordable and accessible to more Filipinos. The private sector, conversely, is clamoring for the government to improve information security, enact better laws, and update infrastructure.

In 1993, President Fidel V Ramos issued two executive orders that sought to de-monopolize the telecommunications industry that was then-dominated by the Philippine Long Distance Telephone Company (PLDT). By encouraging competition from new, smaller players, Ramos hoped to address the problems back then of backlogs in landline subscriptions in the countryside.

Despite the liberalizing policies, very few corporations actually succeeded in running profitable businesses to challenge the giants. In the end, the major players narrowed down to two conglomerates: PLDT and Globe Telecom. “These [companies] are products of market forces, business acumen, knowing what the customers want, having a solid financial means to plug in the investments needed for the country,” Claraval says. The two currently compete head-to-head in providing the best kind of service for their millions of subscribers.

In recent years, the country’s major network providers have been doing their best to keep up with the growing demand for better connectivity.

Globe, for example, recently invested $400 million in submarine cable systems that are interconnected with the South-East Asia Japan Cable (SJC) network. This addresses the increasing requirements for higher bandwidth and better speeds for Globe’s subscribers. With the capacity to stream data at 28 terabits per second, the connection can support simultaneous data-heavy activities, such as streaming of millions of videos, Internet TV, online games, and more.

“Since 2011, Globe has invested over $2.2 billion in our network and IT infrastructure to enhance capacities of our data network and augment legacy-related investments,” Claraval adds. This year, Globe Telecom and Huawei Technologies signed a 5-year partnership deal to further enhance and expand the provider’s mobile network. Globe is also aggressively investing in other facets of ICT development, such as education, finance, and medical assistance.

The two telco operators have also been clamoring for access to the 700mhz frequency spectrum, which is better suited to providing mobile broadband coverage indoors and over large areas. San Miguel Corporation currently owns majority of this spectrum, but Globe and PLDT are urging the National Telecommunications Commission to redistribute the allocation. 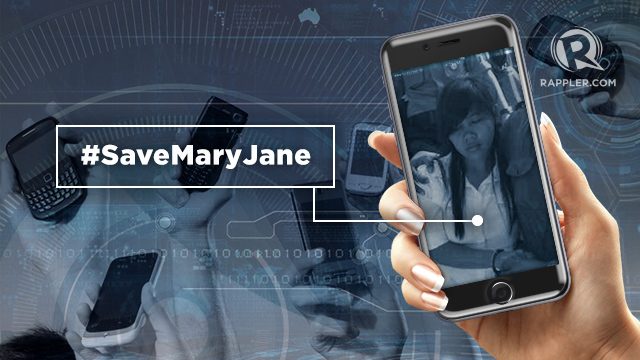 And what about you? What about the average Filipino who now cannot leave the house without his mobile phone? Do your part by being a positive contributor:

At the end of the day, access is meaningless without purpose. ICT’s biggest contribution to our life is not just the ability to create and receive content and services in a faster, cheaper way. Rather, it’s the power to share ideas, mobilize the crowds, and actively change the destiny of our country.

Consider this: way before the record-breaking #Aldub, there was EDSA II, The Million People March, and the #SaveMaryJane petition – nationwide movements that caught global attention, all spurned by one SMS, one Facebook post, one tweet. Think about what we were able to do with so little. Then imagine what we can do with so much more. – Rappler.com