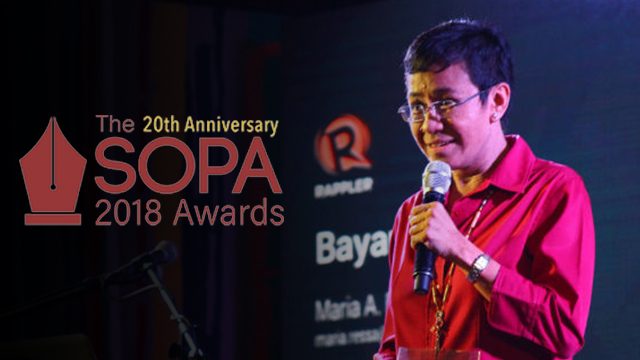 MANILA, Philippines – Rappler CEO Maria Ressa will be the keynote speaker at the SOPA 2018 Awards Gala Dinner that will happen on June 13 at the Hong Kong Convention and Exhibition Centre.

This was announced by Hong Kong-based not-for-profit organization Society of Publishers in Asia (SOPA) on Wednesday, April 11.

SOPA also revealed on Wednesday it has received more than 850 entries in English and Chinese for the SOPA 2018 Awards for Editorial Excellence. According to SOPA, this is a 13% increase from 2017 entries, and the highest number since the launch of the awards in 1999.

This year marks the 20th anniversary of the annual SOPA Awards.

“Since their launch in 1999, the awards have become a world-class benchmark to recognize the best practices in journalism in Asia Pacific, while driving journalistic innovation across international, regional and local media platforms in the region,” SOPA said.

For 2018, instead of the “Journalist of the Year” award, SOPA’s top honor will be the “SOPA Award for Public Service Journalism,” meant to honor “outstanding journalistic work…that represents an exemplary contribution to public service in the Asia Pacific region.”

This year’s awards include 16 other categories aside from the “SOPA Award for Public Service Journalism” category. The finalists will be announced in May, and the winners will be named at the SOPA Awards Gala Dinner in June.

In 2017, Rappler journalist Patricia Evangelista’s “In the Name of the Father” won in the SOPA Awards’ Excellence in Feature Writing category. – Rappler.com