2018 ASEAN-Korea Youth Network workshop to be held in Korea, PH 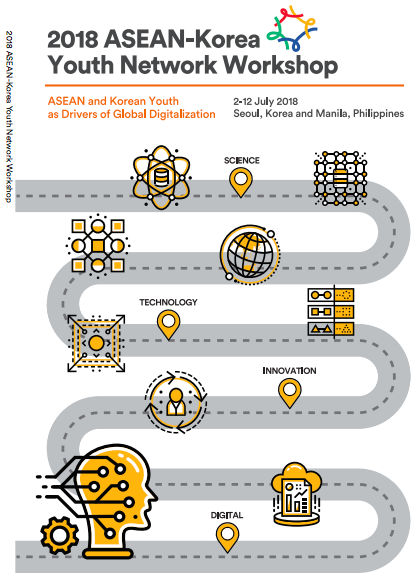 This is a press release from the ASEAN-Korea Centre.

The ASEAN-Korea Centre (Secretary General Lee Hyuk) will hold the ‘2018 ASEAN-Korea Youth Network Workshop’ in Seoul, Korea, and Manila, the Philippines from July 2 to 11.

It will be participated by around 70 youth from the 10 ASEAN Member States, Korea, China, and Japan.

During the 10-day workshop, participants will attend various lectures given by experts on the implications of digitalization at different levels (international, regional, national, provincial) and in different sectors (politics and security, economy, society and culture), visit digital centers and companies in Korea and the Philippines, and take part in cultural exchange and team-building activities which will enable them to become drivers of global digitalization and build networks.

“Young people below 35 represent 65 percent of ASEAN’s total population. They are leaders in digitalization with extensive usage of smartphones and strong technological adaptability. As the world moves toward fully embracing the 4th Industrial Revolution, it is necessary to equip them with skills and knowledge that will help them thrive in the digital economy industry,” said Lee Hyuk, Secretary General of the ASEAN-Korea Centre said.

“The Korea Program will provide an opportunity for ASEAN youth to experience and learn digitalization which is embedded in the lives of Korean people. In turn, the Philippines Program is expected to help Korean, Chinese, and Japanese youth gain first-hand insight on innovation and digitalization of ASEAN. I hope that both programs will give momentum for the participating youth to contribute to the successful digitalization and mutual prosperity in East Asia,” he added.

During the Korea Program, co-organized with Seoul National University Asia Center (SNUAC), participants will attend lectures on various topics such as the ASEAN and Korea relations, global trends in digitalization, as well as implications of digitalization on Korea and ASEAN. Moreover, they will meet with Park Won-soon, the Mayor of Seoul City which adopted digital technology in running the city, and visit Samsung D’Light, Digital Media City, and VR Theme Park to experience digitalization of Korea. In addition, they will not only explore Korean culture by watching traditional performances and wearing traditional clothes but also produce and present a team video under the theme of ‘digitalization of Korea.’

The Philippines program, co-organized with the University of the Philippines Asian Center, will enable the participants to learn from the lectures on topics like the implications of digitalization in ASEAN and the Philippines and visit Acudeen, a fintech company that partners with SMEs and streamlines their payment systems, and Rappler, a social news network operating in the Philippines and Indonesia. Moreover, participants will be provided with opportunities to meet with officials from companies like QBO Innovation Hub and Google on the topic of ‘Entrepreneurship and Innovation,’ visit Filipino cultural heritages such as ‘Las Casas Filipinas de Acuzar’ and ‘Intramuros,’ and experience traditional culture. They will also give team presentations on policy proposal for digitalization and meet with Han Dong-man, the Korean Ambassador to the Philippines.

The ASEAN-Korea Youth Network Workshop has been annually held since 2012. In line with the major global agenda, it was organized under the theme of environment in the last 5 years and will be held under the theme of science, technology, and innovation and digitalization for the next 5 years starting this year. – Rappler.com