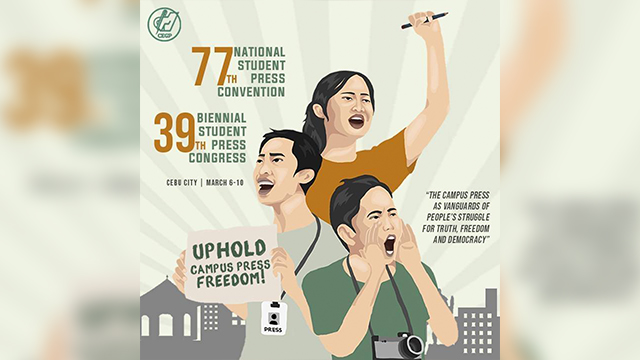 This is a press release from the College Editors Guild of the Philippines.

The College Editors Guild of the Philippines (CEGP) will gather hundreds of youth participants from different parts of the country this year for the 77th National Student Press Convention and 39th Biennial Student Press Congress in Cebu City from March 6 to 10.

The CEGP National Student Press Convention (NSPC) aims to develop the journalism and writing skills of the Filipino youth and likewise raise their social and political awareness.

To reach this objective, an array of journalism training workshops and forum discussions on contemporary social issues will be featured in the activity.

It also aims to provide a venue for student journalists and aspiring writers to share opinions and experiences with one another and educate them on the significance of responsible journalism and writing.

The NSPC is an annual education festival to teach basic, intermediate, and advanced courses of journalism and arts. Sociopolitical education will also be discussed by social scientists and political personalities to instill awareness among members of the campus press on standard issues of the day.

The Student Press Congress, which is convened every two years, is the highest policy making body of CEGP and shall elect the new national president and vice presidents for Luzon, Visayas, and Mindanao.

Now on its 77th year, this gathering will focus on various issues the Filipino youth and people are facing today, such as the foreign intervention in national policies and affairs, rampant graft and corruption in the government, and worsening social, political, and economic climate of the country.

This year’s convention aims to raise the awareness of campus journalists on the current situation of the Filipino society and give them a deeper perspective on the quest for genuine press freedom and social transformation.

Established in 1931, the CEGP is a national alliance of more than 750 tertiary student publications with formations stretched in more than 81 provinces and cities. The Guild is acknowledged as the National Center for the Advancement of Campus Press Freedom. It promotes responsible campus journalism. – Rappler.com