Mar 3, 2019 5:35 PM PHT
Rappler.com
Facebook Twitter Copy URL
Copied
PRESS RELEASE: The 'Kababainhan, Paghabol, Komunidad: A Hablon Weaving Demonstration and Lecture' is a tribute to the artistry and craftsmanship of weavers of Panay 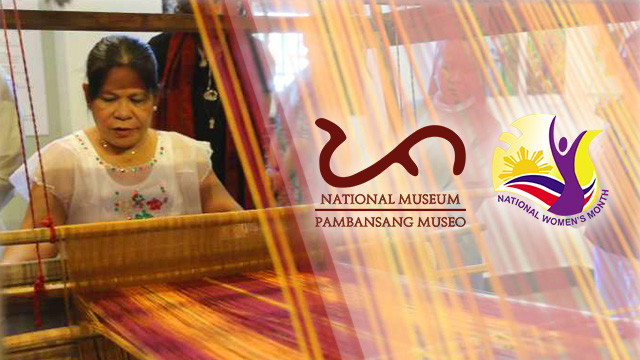 This is a press release from the Western Visayas Regional Museum.

In celebration of National Women’s Month, the National Museum is inviting individuals to join the free weaving demonstration and lectures of the Miagao hablon weavers on March 23 to 24, at Gallery 4 of the Western Visayas Regional Museum and Satellite Office in Iloilo City.

The “Kababainhan, Paghabol, Komunidad: A Hablon Weaving Demonstration and Lecture” which is a tribute to the artistry and craftsmanship of weavers of Panay is aimed at raising public awareness of the issues concerning gender roles, particularly on the continuous stereotyping of weaving as an exclusive skill of and job for women. It is also a call to the public to appreciate and learn more about Panay textile heritage and to inspire the Western Visayas communities to support the revived handwoven textile industry of the region.

Mother and son weavers Mary Ann and Kim Carlo Montagot of Indag-an Multi-Purpose Cooperative, and Constancia and Franco Atijon of Reyden’s Hablon will conduct the weaving demonstration. Meanwhile, other weavers from Indag-an will share their journey as weavers – from the first time they sat before a loom and held a thread up to now as they are already traveling across the country and abroad to share and promote their artistry and craftsmanship.

Weaving is an age-old tradition that once brought fame and fortune to the weavers of Panay Island. In the 1800s, the industry was so lucrative that Iloilo became known as the textile capital of the Philippines. Back then, most households owned a loom and produced traditional textiles woven from indigenous fibers like cotton, abaca, silk, and piña. Contrary to the common belief that weaving is exclusive for women, the weaving processes employed both men and women. The men processed the plants into fibers while the women set up the looms and weaved.

Sadly, due to the shift of capitals to sugar and the entry of cheaper commercialized fibers and fabrics from abroad, weaving was abandoned and only a few communities maintained it.

In the past years, having the National Museum and the Office of Senator Loren Legarda as forefronts, efforts were made to revive the country’s traditional textiles. The first among the many collaborations is the setting up of “Hibla ng Lahing Filipino: The Artistry of Philippine Textile” permanent exhibition at the National Museum of Anthropology in Manila and corollary programs like lecture series on indigenous fibers and traditional textiles, traveling exhibition, and weaving demonstrations.

Government agencies such as the Department of Trade and Industry, Philippine Fiber Development Authority, and local government units, among others, also stepped up initiatives to support the production of indigenous fibers in known weaving communities all over the Philippines. With the demand for handwoven products increasing, men are now also attracted not only to the processing of plants but to weaving as well, thus breaking the stereotypes and gender-typing of weaving as a skill exclusive for women.

Those wishing to join the demonstration and lectures can attend the 9 to 11 am session or the 2 to 4 pm session, either on Saturday or Sunday. The public is also encourage to patronize local products as weavers will also display their produce during the event.

The weaving demo and lecture is free but slots are limited. Pre-registration is required. For inquiries and reservations, kindly contact the National Museum Western Visayas at 033-327-3782 or via email at nmiloilo@yahoo.com. – Rappler.com