Doctors Without Borders to hold photo exhibit in Cebu City 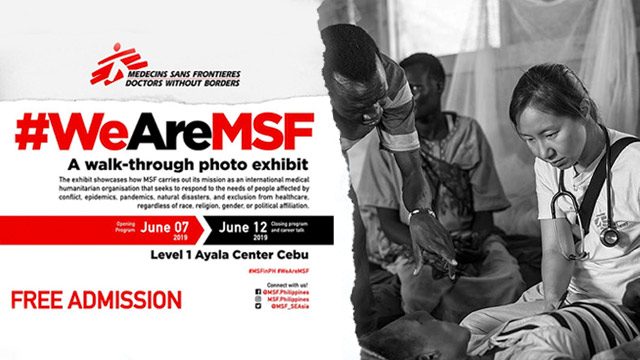 Facebook Twitter Copy URL
Copied
PRESS RELEASE: The '#WeAreMSF: A Walk-through Photo Exhibit' will showcase photos that capture what the organization stands for and how Filipinos can join its cause

This is a press release from Doctors Without Borders.

“Cebu City is crucial to public awareness, and the recruitment initiative of Doctors Without Borders in the Philippines because of established medical schools and institutions here. Further, most of our Filipino medical and non-medical staff are from the Visayas region,” said Polly Cunanan, communications manager for Southeast Asia.

The weeklong event, entitled “#WeAreMSF: A Walk-through Photo Exhibit,” will run from June 7 to 12 at the Ayala Center Cebu.

It will showcase especially curated photos that capture what MSF stands for and how Filipinos can join its cause of providing independent, impartial, and neutral medical humanitarian aid to people affected by conflicts, natural disasters, epidemics, pandemics, and exclusion from health care. The exhibit will also feature digital games developed by MSF that visitors can play for free.

“2019 is momentous for MSF because we are commemorating our 35th year of presence in the Philippines through various aid missions that began in 1984. The exhibit looks back at MSF missions in the country, such as the response launched in the aftermath of Typhoon Yolanda,” Cunanan said.

MSF is also commemorating the 20th anniversary of winning the Nobel Peace Prize in 1999 that led to the founding of MSF Access Campaign, an entity within the aid group that focuses on advocating for accessible life-saving drugs.

Aside from photos, pieces of “pill jewelry” will be on display for visitors and guests to try on. The pill jewelry pieces aim to reiterate the long-held advocacy of Access Campaign that medicines shouldn’t be a luxury.

The opening program on June 7 at 5 pm will feature the first public unveiling in the Philippines of the #WeAreMSF video, and talks from Filipino field workers who have been on the frontlines of health care crises in different parts of the world. The Women in Literary Arts-Cebu, Incorporated will also have a special participation in the opening ceremonies.

On June 12, Dr Morpheus Causing, an Ilonggo, and former president of MSF-Hong Kong will conduct a career talk on who can join MSF and how.

Admission to the talks and exhibit are free. – Rappler.com