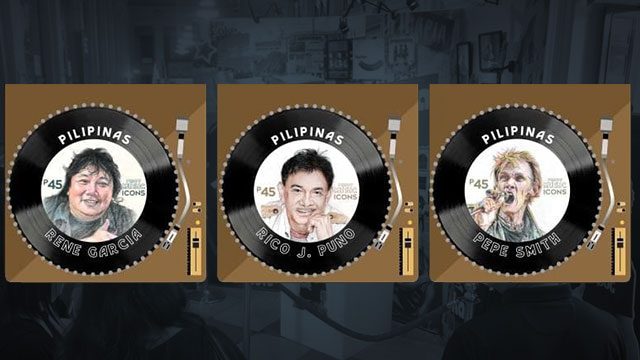 This is a press release from the Philippine Postal Corporation.

“The stamps serve as tiny windows of a nation. It’s about time that we truly recognize the big role of OPM in the development of our Filipino culture,” PHLPost said.

The Pinoy Music Icon stamps were sold starting November 11 at P45 each, with a total of P135 for the strip of 3 souvenir sheet.

The stamps and Official First Day covers of “Pinoy Music Icon stamps” can be bought at the Philatelic Counter at the Manila Central Post Office in Liwasang Bonifacio 1000, and in other area post offices nationwide.

A special exhibit at the Manila Central Post Office (MCPO) lobby also showcases the icons’ memorabilia lent by their respective families. The exhibit is open to the public from Saturday, November 16, until Friday, November 22. Garcia of the iconic Hotdog band that pioneered the Manila Sound died of cardiac arrest on September 2, 2018, at the age of 65.

Aside from paying tribute to their contributions in Philippine history, culture and arts, PHLPost took notice of the important role that the 3 Filipino music legends played in linking the past and the present generations though their own brand of music.

Philately or stamp collecting is considered the world’s most fascinating hobby. Through this, everyone can learn of a country’s history, art, culture, and industry as depicted in special commemorative stamps.

PHLPost has also lined up the following activities for the month-long celebration of the 25th year of National Stamp Collecting Month:

The NSCM is an annual event observed every month of November under Presidential Proclamation No. 494 signed by then President Fidel V. Ramos, to celebrate philately in the country. It aims to create, maintain, and increase postal awareness and interest through various activities that would inspire and encourage Filipinos across all ages to venture into the hobby of stamp collecting. – Rappler.com