Nov 30, 2019 3:35 PM PHT
Rappler.com
Facebook Twitter Copy URL
Copied
PRESS RELEASE: Many of the IP communities were converted and have accepted the tradition of Christmas 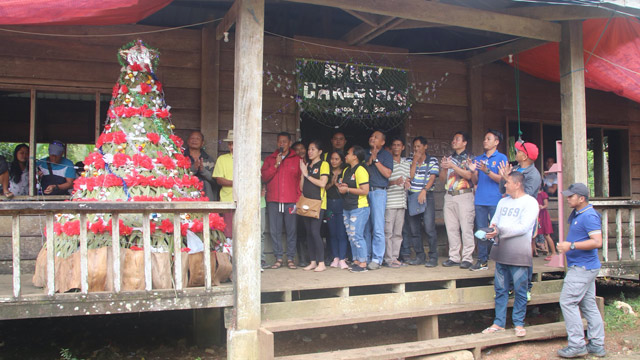 The following is a press release from the 3rd Special Forces “Arrowhead” Battalion, Philippine Army,

With the free, prior and informed consent from indigenous peoples (IP) leaders, the first ever Christmas tree was lighted at the tribal hall in Sitio Simuwao in Lianga, Surigao del Sur, on Wednesday, November 24.

With the influence of the Christian religious sectors, particularly the Dominican sisters, Aglipayan, Catholic Churches, and various religious missionaries, many of the IP communities were converted and have accepted the tradition of Christmas.

The community support team worked with the IP community to make a Christmas tree out of recycled materials, further adorned with colorful lights. According to the team, the Christmas tree symbolizes peace, hope, love, and reconciliation which are the virtues obtained from the story of the birth of Jesus Christ.

Felix Tayon, Sitio Kilometer 9 vice chairman and a member of the Malahutayong Pakigbisog Alang sa mga Sumusunod (MAPASU), said that gradually, he could see the positive developmental changes in their community.

Meanwhile, The provincial task force to end local communist armed conflict and the military continues to humbly reach out to the religious sectors and MAPASU to reconcile and work together to attain lasting peace in the Andap Valley Complex, citing that they have one common goal which is to end conflict. – Rappler.com