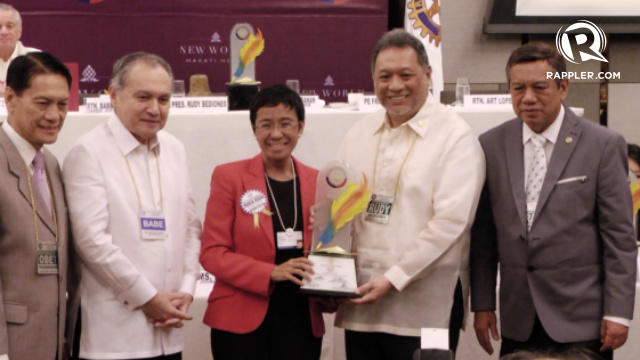 MANILA, Philippines – Rappler chief executive officer Maria Ressa was awarded Journalist of the Year by the Rotary Club of Manila (RCM) on Thursday, May 22.

Ressa was among the media practitioners recognized by the first Rotary Club in Asia during its annual Journalism Awards.

The awardees were chosen by the Journalism Awards Committee and its club membership.

Citing reports from the Committee to Protect Journalists, RCM president Rudy Bediones said the Philippines is the second deadliest country for journalists, with 76 deaths from 1992 to 2013. Of these journalists, 62% covered the political beat.

“The recognition, therefore, that Rotary Club of Manila bestows on these exceptional men and women of media is our way of acknowledging not only the talents, skills, and achievements, but also the bravery they have shown and the sacrifices they make in the practice of their noble profession. In so doing, they symbolize Rotary’s motto of service above self,” Bediones said on Thursday.

The other awardees are:

RCM’s Journalism Awards was first launched in 1966 to honor outstanding contributions in media. It was halted in 1972 during Martial Law and relaunched 14 years later, in 1986, to encourage the proper development of Philippine journalism. – Rappler.com