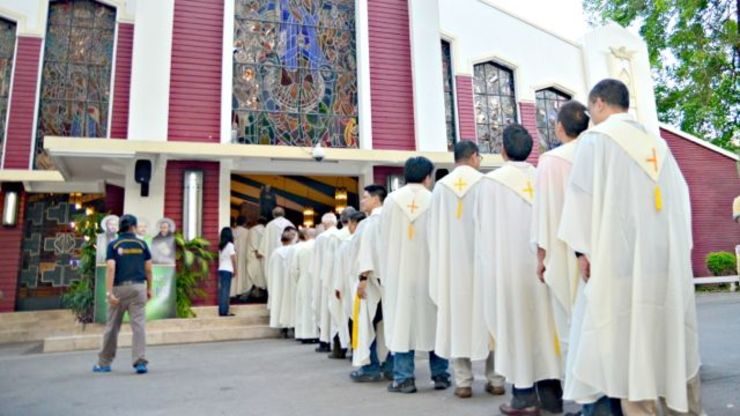 CAGAYAN DE ORO CITY, Philippines – With the theme Ite inflammate omnia which means “Go, set the world on fire,” the Philippine Jesuits commemorated the 200th anniversary of the restoration of the Society of Jesus (SJ) in the “City of Golden Friendship.”

Xavier University (XU) – Ateneo de Cagayan on Wednesday and Thursday (August 6-7) hosted the event that served as an opportunity for the Jesuits to recollect and reflect on their challenges and accomplishments over the years.

“[Fr. Nicolás] wishes that during this anniversary, we make an effort to live more profoundly the spiritual aspects of our vocation,” Fr. Yap said.

Among the aspects the Jesuits must inculcate according to Fr. Nicolás are: creative fidelity, love for the institute, fraternal companionship, universal mission and faith in providence.

The celebration started with a forum on how the Jesuits can help in addressing various social issues, especially in Mindanao, and the different pronouncements of Pope Francis, the first pope from the Society.

One of the members of the discussion panel, Cagayan de Oro Archbishop Antonio Ledesma SJ, DD, underscored the importance of inter-religious dialogues and peace talks in the conflict areas of the second largest island of the Philippines.

“Peace-building and the completion of the Comprehensive Agreement on the Bangsamoro are major concerns. We can focus on the rewriting of a more balanced history of Mindanao that includes the perspectives of Muslims and the indigenous people (IP),” he said.

Sustainable agriculture, the challenges faced by overseas Filipino workers (OFWs), and the rehabilitation of the environment to mitigate climate change and reduce disaster risks were also tackled in the forum.

Officials of the SJ Philippine Province, the presidents and faculty of the different Ateneo universities and representatives from non-government organizations (NGOs) attended the event. Recalling the dissolution of the Jesuits

This year, the Society of Jesus looks back on one of the most challenging periods in their history—the abolishment of their Order, following the political tremors in Europe during the 18th century.

The curtailment of the Society transpired at the height of the numerous tensions between the Catholic Church and the different European royal states, as kings and princes got “fed up” with the Church’s thirst for political control and wealth.

“In his papal brief of July 21st 1773, Dominus ac Redemptor, Pope Clement XIV suppressed the Society of Jesus. The Jesuits worldwide including those in the Philippines were expelled,” Fr. Yap said in his Red Mass homily.

The Society became the first religious institution inflicted by the papal suppression.

In 1767, 6 years earlier from the official papal brief, the Spanish throne already ordered the banishing of the Society from all its dominions but the royal decree only reached the Philippines a year after, on May 17, 1768.

Jesuits in the Philippines

On Aug 7, 1814, came the official restoration of the Jesuits with Pope Pius VII’s issuance of Sollicitudo omnium ecclesiarum, the papal bull by which he reinstated the Society worldwide.

The restoration encouraged the return of the Jesuits to the Philippines.

On December 10, 1859, Spanish Jesuits started operating the Escuela Municipal, a small school for the children of Spanish residents in Manila, which is presently known as the Ateneo de Manila University (ADMU).

In the following years, the Society concentrated its missionary work in Mindanao and they were able to establish 3 Ateneo schools and a number of parishes across the island.

PH Provincial Superior Fr. Antonio Moreno SJ said in his homily during the celebratory Mass that the support from their partners has continued to be overwhelming to this day, adding that the curtailment of the Society of Jesus was a revelation of its obedience and submission to “God’s great plans.” – Rappler.com