Search on for hardworking public officials and employees 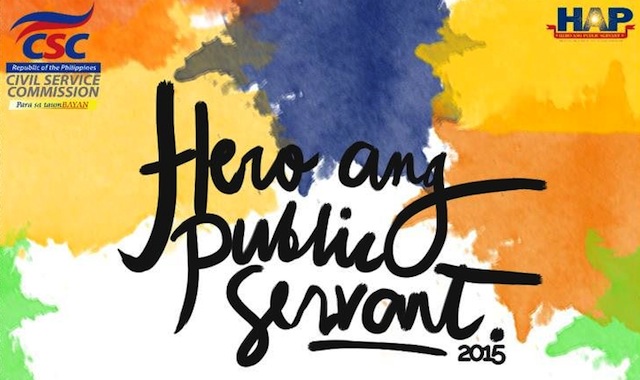 This is a press release from the Civil Service Commission.

Do you know someone who works in government who deserves an award from the President of the Philippines for his/her exemplary service?

The Civil Service Commission (CSC) announces that nominations to the 2015 Search for Outstanding Public Officials and Employees may now be submitted to the CSC’s provincial/field and regional offices. The annual Search forms part of CSC’s Honor Awards Program (HAP) and the awards to be given out are the highest and most coveted recognition given by the government to individuals or group of individuals who have excelled or shown utmost dedication and commitment in public service.

All officials and employees in the career and non-career service of the government including appointive barangay officials may be nominated. Employees who are under job order or contract of service are excluded from the coverage of the program.

The 3 award categories under the Search are the Presidential Lingkod Bayan award, Outstanding Public Officials and Employees or the Dangal ng Bayan award, and CSC Pagasa.

The Outstanding Public Officials and Employees or the Dangal ng Bayan Award is conferred to an individual for performance of extraordinary act or public service and consistent demonstration of exemplary ethical behavior on the basis of his/her adherence to the Code of Conduct and Ethical Standards for Public Officials and Employees. Roster of past awardees include: Governor Edgardo M. Chatto of Bohol, Police Senior Superintendent Benigno B. Durana Jr of the Philippine National Police, Dr Eleanor Javonillo of the City Government of Antipolo, and Professor Pablo U. Amascual III of the Leyte Normal University.

The CSC Pagasa Award is given to an individual or group of individuals for outstanding contributions that directly benefit more than one department of the government. Some of the awardees were Social Welfare Officer V Nora D. De La Paz of the Department of Social Welfare and Development Field Office I, Mayor Jose M. Ricafrente Jr of the Municipal Government of Rosario in Cavite, the Tarlac College Of Agricuture-Agroforestration Project, and the Office of the City Assessor of the City Government of Antipolo.

Any individual or organization with extensive knowledge of the outstanding work performance and/or exemplary ethical of certain public servants may nominate an individual or group of individuals for a specific category in the Honor Awards Program.

Deadline for submission of nominations for all award categories to any CSC provincial/field or regional office is March 31, 2015.