Jul 30, 2012 1:05 PM PHT
Rappler.com
Facebook Twitter Copy URL
Copied
The contest encourages young people to create short vignettes relating their perspectives and experiences regarding the general concept of sexual health, sharing with the public their own opinions about what it means to them 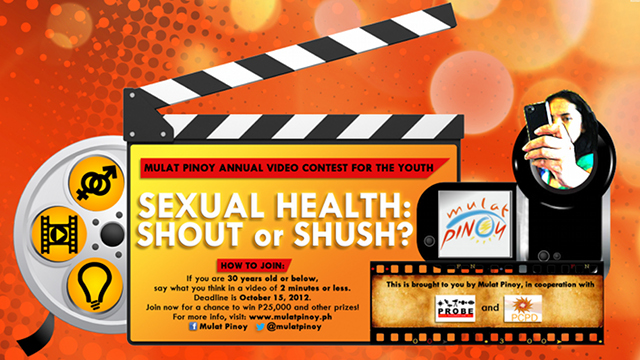 MANILA, Philippines – Are you an aspiring filmmaker? Are you Filipino, below the age of 30, and interested in sexual health-related issues?

If you are all of the above, you may want to join “Sexual Health: Shout Or Shush?”–an amateur video contest organized by the Probe Media Foundation, Inc. under its Mulat Pinoy a project.

The contest, which was launched on Saturday, July 7, 2012, at the Filipinas Heritage Library, encourages young people to create short vignettes relating their perspectives and experiences regarding the general concept of sexual health, sharing with the public their own opinions about what it means to them.

It welcomes submissions representing any and all opinions with regard to sexual health.

Mulat Pinoy hopes that this contest will allow for a broader discussion across all concerned citizens, in both public and private sectors, and especially in the most concerned sector of all: the youth.

Important things to remember, if you plan to join:

2. Entries must be no more than 2 minutes long.

3. A panel of judges will view all the entries and select 10 finalists.

4. The winners will be selected by public voting via social networks.

5. The winning entries will be announced in December 2012.

The panel of judges includes a variety of experts from the fields of media and sexual health, namely: Atom Araullo of ABS-CBN News and Current Affairs; Clodualdo Del Mundo of De La Salle University; Pauline Mangilog Saltarin of Jesuit Communications; Ana Santos of Sex and Sensibilities; Romeo Dongeto of Philippine Legislators’ Committee on Population and Development; and Rappler.com.