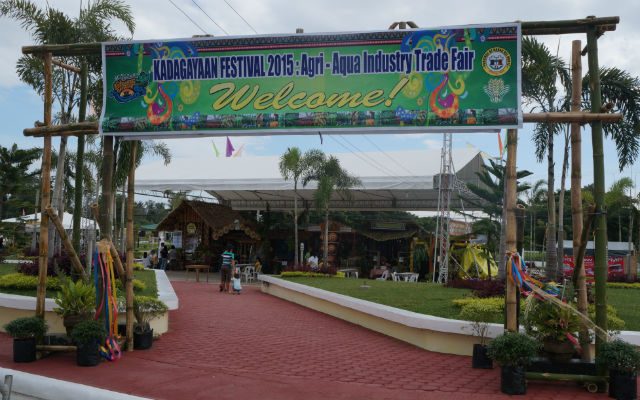 Facebook Twitter Copy URL
Copied
The 'Kadagayaan' - derived from the word 'dagaya' which means abundance and bounty in the local dialect - upholds DavNor's riches in terms of culture, products, destinations and natural resources

Davao del Norte kicked off on Wednesday, July 1, the week-long Kadagayaan Festival, alongside the celebration of the province’s 48th founding anniversary.

Despite heavy rain, the Dabaonons did not let the bad weather spoil the harvest festival.

Governor Rodolfo del Rosario and other local officials conducted a motorcade around the provincial roads marking the start of the biggest celebration in Davao del Norte.

The convoy started in Panabo City, passing over the municipalities of Carmen, Sto Tomas, Kapalong, and Asuncion before arriving in the province’s capital, Tagum City.

Del Rosario then proceeded to the onset of the Agri-Aqua Industry Trade Fair at the Provincial Capitol Park, which was graced by the presence of Trade Undersecretary Zenaida Maglaya.

Municipalities like Carmen and Talaingod showcased their main products by putting up booths that represented their industry.

Various products and industries were displayed, from crops like cacao, banana, local vegetables to tourist attractions such the Katabangan Cave in Talaingod that leave visitors in awe. The fair also served as a venue to encourage locals to invest in farming and aquatic businesses.

The governor said that the “Kadagayaan,” derived from the word “dagaya” which means abundance and bounty in the local dialect, upholds DavNor’s riches in terms of culture, products, destinations and natural resources.

“Dabaonons huddle and unite to give thanks for a fruitful harvest,” he added.

With the theme, “Kadagaya Ug Kasadya, Sa DavNor Makita” (Bountifulnees and Festivity Abound in DavNor), the provincial government lined up interesting events to celebrate its successes throughout the year.

According to the Del Rosario, among the many reasons that call for a big celebration is the province’s success in hosting the Palarong Pambansa 2015 last May.

The province was praised for it’s top-notch performance in housing thousands of participants of the national games and its world-class sports facilities. (READ: DavNor eyes local sports academy by 2016). – Rappler.com