Haven’t watched ‘Aswang’ yet? Here’s how you can catch it 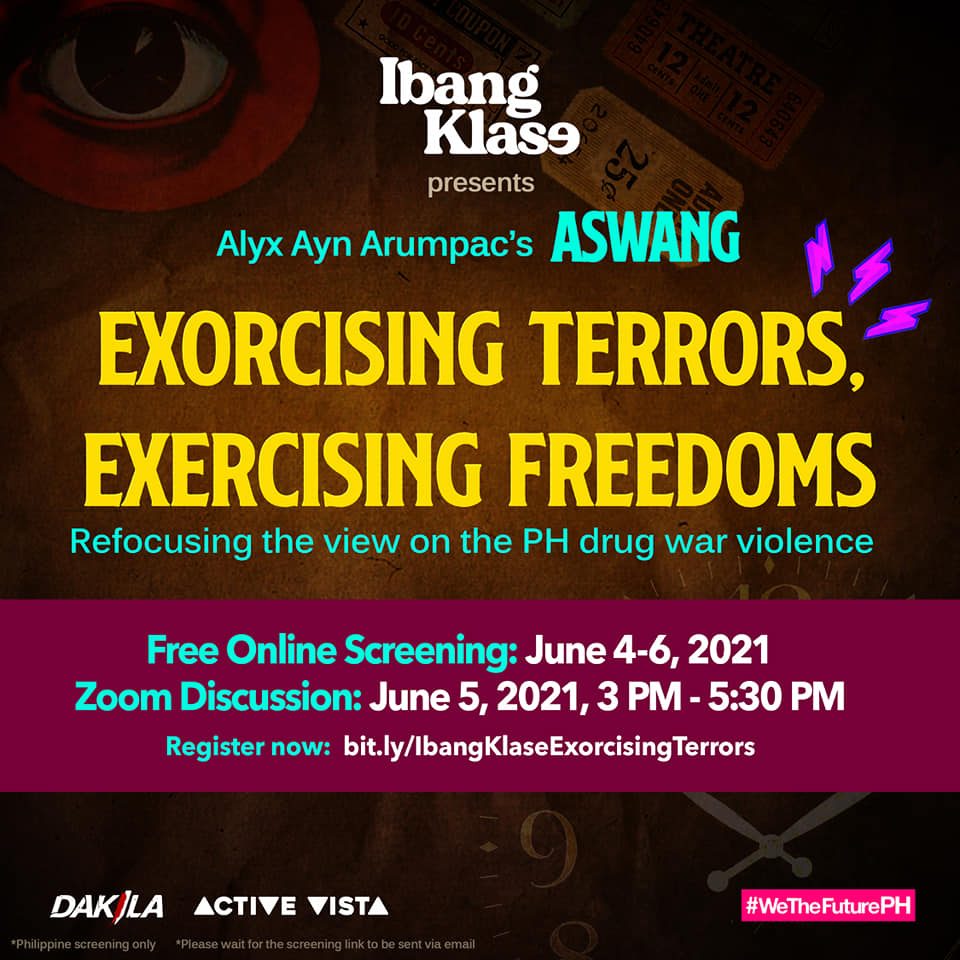 Facebook Twitter Copy URL
Copied
PRESS RELEASE: The special screening of the movie and a forum on refocusing the view on drug-related violence in the country is scheduled at 3 to 5 pm on Saturday, June 5

Amid the pandemic last year, the free streamings of Alyx Ayn Carumpac’s critically-acclaimed documentary on President Duterte’s war on drugs, Aswang (2019), flooded the internet. It was sought after by filmmakers, journalists, celebrities, personalities, and the public, but the screenings remained limited. But those who haven’t watched it yet need not worry.

DAKILA and Active Vista, through We The Future PH, present “Exorcising Terrors, Exercising Freedoms,” an Aswang special screening and a forum on refocusing the view on drug-related violence in the country on Saturday, June 5, 2021, 3 to 5 pm via Zoom.

But watching this documentary is far more than just being in the know. For DAKILA Communications Director Andrei Venal, it is about understanding what our nation and our countrymen have been going through in the past years of this gruesome campaign. “Aswang is an important documentary every Filipino needs to watch. It opens our eyes to the grim reality of the war on drugs — from the big picture of systemic violence to focused individual effects on the lives of the victims and their families, especially the children,” he said.

“This event aims to revive the conversations on this issue. These acts of violence mustn’t get lost in our consciousness as these do not only continue but even worsen,” Venal added.

Aswang follows the first two years of the campaign against drugs. It humanizes what most of us have only ever watched or read on the news as it shows the real lives behind data and statistics of drug war victims.

But most importantly, the documentary leaves us with burning questions: What can we do about it? How can we change this systemic violence?

“This both in-depth and interactive discussion with the filmmaker, experts, artists, and personalities direct audiences to different routes of seeking justice after watching the documentary. One is through seeking accountability for all the casualties of the war on drugs,” We The Future PH Youth Engagement Manager Madelene de Borja said.

“Either in the local or international court, actors of the drug campaign must answer for their crimes against the Filipino people. We should also complement this with a harm reduction approach or the humane and human rights-based approach in addressing drug issues,” de Borja added.

Participants may register at this link. The Aswang documentary will be accessible for all the event registrants a day before and after the forum. Meanwhile, toolkits on seeking justice and advocating for harm reduction approach shall be available on We The Future PH website. – Rappler.com