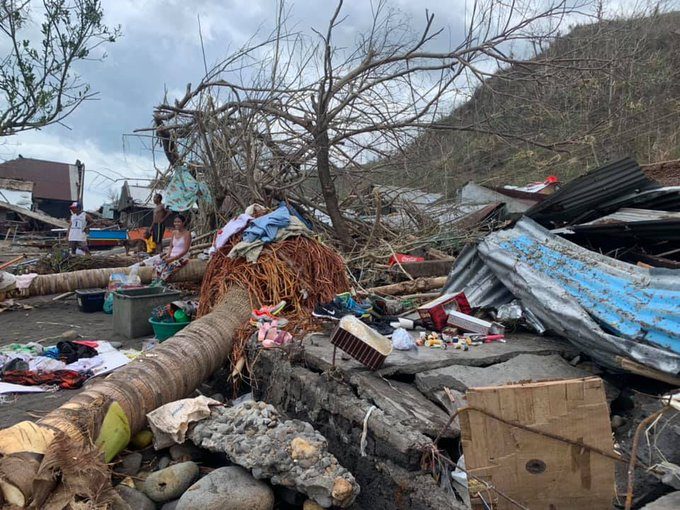 The damage left behind by Super Typhoon #RollyPH at Brgy. Sogod in Tiwi, Albay on Monday, November 2. Brgy. Sogod is one of the most affected areas struck by the typhoon.

This is a press release from the United Nations.

The Humanitarian Country Team in the Philippines launched a Humanitarian Needs and Priorities Plan on Monday, November 9, to respond to the needs of 260,000 of the most vulnerable people in provinces affected by Super Typhoon Rolly.

Response efforts are already underway after the typhoon left a trail of extensive damage as it cut a swathe across southern Luzon on November 1. The Bicol Region bore the brunt of the typhoon’s violent winds and torrential rains, blowing away roofs, toppling structures, and causing severe flooding and landslides.

The plan calls for $45.5 million to deliver and implement humanitarian activities to typhoon-affected people living with poverty prior to the disaster and now requiring urgent humanitarian assistance in 16 prioritized municipalities in Catanduanes and Albay provinces in support of the Government response.

The plan has been developed based on preliminary assessment findings and early estimates of people in need to enable humanitarian partners to kick-start immediate life-saving and protection activities.

On November 8, the UN Resident and Humanitarian Coordinator Gustavo Gonzalez led an inter-agency fact-finding team to Albay Province to witness first-hand the damage wrought by the typhoon. During the mission, Gonzalez spoke with local officials, frontline responders, and typhoon-affected people in Albay Astrodome in Legazpi and surveyed the impact of the powerful typhoon on the coast in Tiwi, where the second landfall occurred.

“Seeing the devastating effects of the typhoon, we express our deep concern for the thousands of families affected by this disaster.” said Gonzalez. “The UN and humanitarian partners in the Philippines are mobilizing all our resources to ensure that we leave no one behind at this time of great need.”

The Government of the Philippines made significant efforts to protect people and infrastructure, leveraging the investment made since Typhoon Haiyan (Yolanda) exactly 7 years ago and underlining the leadership role played by local officials. As Typhoon Goni (Rolly) approached, the local authorities pre-emptively evacuated over 480,000 people, effectively saving lives.

At the invitation of the government, over 80 humanitarian partners in the country – including the United Nations (UN), non-governmental organizations (NGOs), the Red Cross and Red Crescent Movement, and the private sector – are scaling up life-saving and protection response activities in support of the government response, building on established partnership agreements and relationships strengthened over years of collaboration.

The plan aims to save lives and livelihoods by providing immediate, integrated humanitarian assistance and protection to those in the most urgent need. It aims to restore livelihoods and access to critical services to promote the rapid recovery of the most affected communities.

The plan will also work on addressing the needs and advocating for the rights of vulnerable populations such as women, boys and girls, and persons with disabilities. The vulnerability of people to disasters has been exacerbated by the social and economic consequences of the COVID-19 pandemic.

Humanitarian assistance is reaching people in need despite complications in operations due to COVID-19 prevention measures. Humanitarian partners are following government protocols created in the aftermath of Typhoon Vongfong (Ambo) in their response to this typhoon, and are adapting response activities to safeguard safety, quality, and timeliness of humanitarian response while protecting affected people from further exposure to the virus.

“The preemptive evacuation instructed by the government was critical in significantly reducing the loss of lives and livelihoods,” said Gonzalez.

“With donor support, the UN and humanitarian partners are ready to translate solidarity into concrete support though a coordinated response that combines emergency relief assistance and early recovery efforts to help people get back on their feet.” – Rappler.com