Oct 29, 2015 8:17 PM PHT
Agence France-Presse
Facebook Twitter Copy URL
Copied
In a new cost-cutting measure, Germany's biggest lender also announces that it would pull out of 10 countries after it clocked up record losses in the third quarter 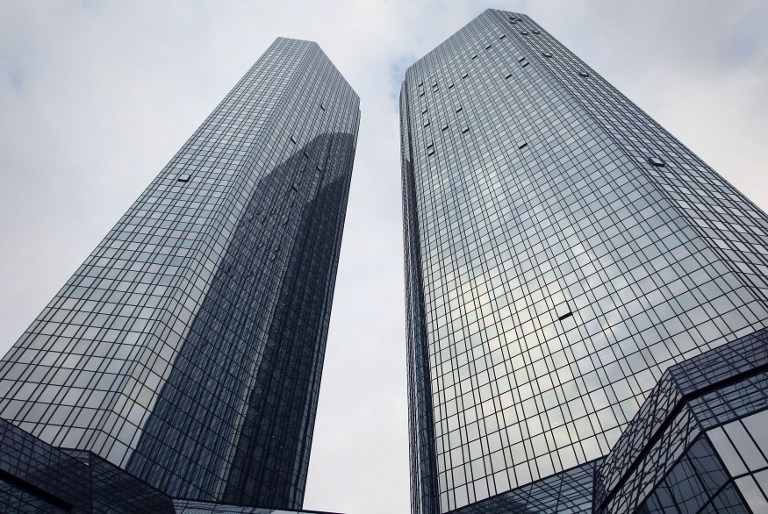 FRANKFURT, Germany – Deutsche Bank, Germany’s biggest lender, unveiled Thursday, October 29, a massive new cost-cutting drive, saying it would axe thousands of jobs and close down operations in 10 countries after it clocked up record losses in the third quarter.

At the same time, Deutsche Bank would reduce its workforce by approximately 9,000 net full-time equivalent positions. It would also slash around 6,000 external contractor positions in its global technology operations.

These measures would lead to gross cost savings of about 3.8 billion euros ($4.6 billion), with associated restructuring and severance costs of approximately 3.0-3.5 billion euros, the bank said.

Deutsche Bank is mired in a tangle of litigation cases and has been fined for involvement in rigging interest rates.

Cryan, who was appointed in July and is co-CEO alongside Juergen Fitschen, said the strategic changes would be aimed at “stabilizing the bank and turning around its long-term performance.”

“Sadly, this also means closing some of our branches and country locations, and reducing some of our front-office and infrastructure staff too. This is never an easy task, and we will not do so lightly,” Cryan said.

Cryan said the bank planned to dispose of assets with a total cost base of approximately four billion euros and 20,000 full-time equivalent positions “over the next 24 months.”

Earlier, Deutsche Bank had revealed that litigation costs and write-downs pushed it to a record net loss of 6.01 billion euros in the third quarter. A year earlier, the net loss had stood at just 94 million euros.

Cryan described it as a “highly disappointing result.”

Earnings were hit by write-downs worth 5.8 billion euros in the corporate banking and securities division as well as the private and business clients section of the bank, Deutsche said.

In addition, Deutsche Bank took a charge of 649 million euros on its investment in China’s Hua Xia Bank and set aside a further 1.2 billion euros in provisions for regulatory and litigation matters, Cryan explained.

On top of this, “our revenues were impacted by challenging market conditions with persistent low interest rates and uncertainty around the (US) Federal Reserve’s interest rate policy,” he said.

Nevertheless, Deutsche Bank said that its key capital ratio — a measure of its financial strength — rose slightly to 11.5 percent, “partly reflecting lower risk weighted assets and leverage exposures, and our decision not to recommend a dividend for the year,” Cryan said.

“Revenues in core businesses held up, despite mixed business conditions during the quarter with market volatility in August and September,” he added.

Crysan said that “unless there’s a miracle we are most likely to report for the year a loss.”

Already on Wednesday, Deutsche Bank had said it would not pay dividends to shareholders in 2015 and 2016, but hoped to resume them again in 2017. It has paid a dividend every year since Germany’s postwar reconstruction, including throughout the 2008-2009 financial crisis.

The decision was made to help the bank meet new financial targets set for 2020, it said, which could only be achieved by withholding compensation for shareholders this year and next.

Deutsche Bank is mired in around 6,000 different litigation cases and was fined in May a record $2.5 billion for its involvement in rigging interest rates.

It has also faced probes by Swiss authorities for suspected price fixing on the precious metals market, and US investigators have looked at its Moscow branch on suspicion of possible involvement in money-laundering.

Investors did not appear to be pleased by the record third-quarter loss or particularly convinced by the cost-cutting plans. Deutsche Bank shares were the biggest loser on the Frankfurt stock exchange on Thursday, shedding 4.68 percent to 26.19 euros. – Simon Morgan, AFP / Rappler.com