PH ‘father of semiconductors’ shows APEC what innovation can do 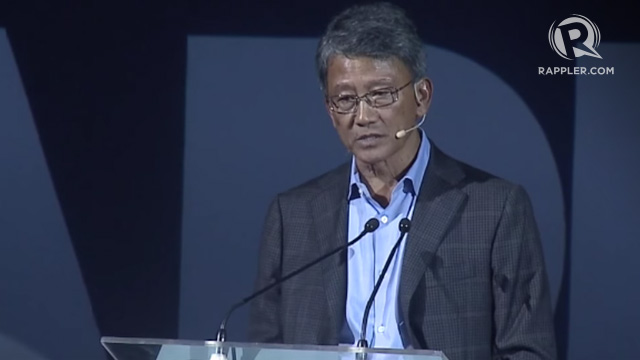 MANILA, Philippines – One of the words most often heard at this week’s APEC Summit was innovation. World leaders and trade ministers used it liberally, promising that it would lead to all kinds of good things.

Cagayan-born Silicon valley entrepreneur and venture capitalist Diosdado “Dado” Banatao provided a global audience with concrete proof of just what innovation can lead to if harnessed properly at the 2015 APEC SME Summit.

The man known as the father of semiconductors urged APEC to consider policies for inclusive growth carefully while outlining the exact conditions needed in logical, mathematical terms.

Experts agree that a local economy is sustained by the capacity of its population to save money – that savings are the key enablers for investment.

Minimal growth for savings therefore means a minimal economic growth. When the rich are the only source of significant savings, the gap between the rich and the poor widens.

To jumpstart growth one must access the global market, which is infinitely bigger than the local market. That is now possible because the global market is open, highly integrated in infrastructure and always in need of high value tech-based products.

Countries that don’t have a base of scientists and engineers would not be able to enter the competitive global marketplace. They do participate in low wage services, but it is not sufficient to grow the economy substantially.

In developing markets, it’s up to the government, academe, and industry to develop an adequate foundation for this to happen, he said. Once the foundation is there, you need risk-takers and entrepreneurs to take advantage and drive growth.

“Entrepreneurship is the fastest method of diffusion of wealth to the population. This group of risk takers can come from any sector of society, and is the best way to create inclusion,” emphasized Banatao.

He himself proves the theory, having grown up in the rural Cagayan mountains and having to walk barefoot to school.

“We learned arithmetic in Grade 1 using 20 bamboo sticks. It was significant to me because it was the first time I fell in love with mathematics and was opened to the possibilities of what the mind could come up with through it,” he recounted.

From those humble beginnings and through hard work, he was able to graduate from a good school and unable to find a job in engineering, eventually became a pilot for Philippine Airlines.

That fork in the road eventually turned out to be his ticket to US where he found himself working for Boeing on the 747 project, which at the time was two years away from launch and needed systems integration which Banatao worked on.

From there, he then realized that, looking at the market of airplanes is very small, after all how often to manufacturers design new commercial planes.

He ended up developing an interest in solid state physics, and so enrolled at Stanford University, taking up computer architecture. Solid state physics would eventually develop into the semiconductors, the basis for modern computer.

Banato himself invented several pioneering computer chips which he parlayed into entrepreneurship. His first venture failed but his second, S3 Graphics, ended up going public.

To this day, it stands as the fastest ever company to have an IPO in Silicon Valley, taking 22 months on it journey from start to the NASDAQ.

Banatao’s career in Silicon Valley has spanned 40 years covering numerous fields, and has since taken him to venture capitalism through his role as Managing Partner in Tallwood Venture Capital, where he invests in entrepreneurs of the future.

He is also a major philanthropist and works with the Philippine Development Foundation (PhilDev) and his own charities, in developing initiatives that focus on driving on education, innovation, and entrepreneruship.

Noting previous speakers Josette Sheeran’s observation that Manila will become a center of innovation in the future, Banatao promised that would happen.

His own story will help inspire that. – Rappler.com