IT revolution crucial to seeing PH through growth crossroads

Mar 13, 2016 9:10 PM PHT
Chris Schnabel
Facebook Twitter Copy URL
Copied
A new study shows that the country has a rare window of opportunity to spur greater growth, but it must focus on innovation 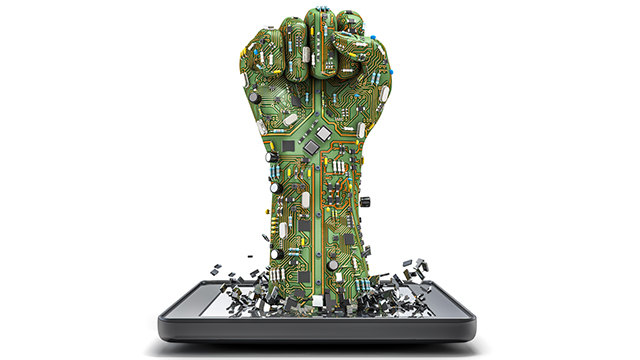 MANILA, Philippines – As the saying goes, “Innovation is creative destruction.” In the case of the Philippines, which has undergone an economic renaissance of sorts, it must destroy certain ingrained methods and mentalities in order to keep evolving.

In the last 5 years, the country’s economy grew by an average of 6.2%. It also saw upgraded credit ratings and a relatively healthy outlook from global institutions, compared to the grim global picture.

The key is to tap technology, according to Eduardo Araral Jr, vice dean of research at the National University of Singapore (NUS) Lee Kuan Yew School of Public Policy, and Lourdes Montenegro, a PhD student.

“Innovating government, business and daily life with the help of technology may just be what the Philippines needs to expedite a qualitatively better and faster pace of development,” they wrote in a study entitled “Shared Prosperity: An ICT Manifesto for the Philippines for 2016 and Beyond.”

Written in partnership with NUS and Microsoft Philippines, the paper stated that “the next couple of decades present a rare window of opportunity, during which the country can build on progress already made and implement further change to expedite development.”

The paper advocates a digital revolution by boosting the skills of the public and the government in ICT or information and communications technology.

It also noted that beyond accelerating growth, ICT innovation has also been proven to make that growth more inclusive if applied correctly.

The manifesto stated that ICT, in general, and broadband technology, in particular, are key drivers of growth in the information age.

A Harvard study showed that a 10% increase in the ICT capital stock of a country adds an extra 0.45 percentage points in real GDP growth.

The diffusion of broadband technologies can have an even greater impact on economic growth.

“In the ASEAN region, other factors being equal, a one percentage point increase in Internet penetration rates translates into an additional .65 percentage points of GDP growth, on average,” the manifesto said.

This would mean at least P75 billion more in GDP for the Philippines based on 2013 values.

Before considering what that added GDP could bring, it is useful to consider the Philippines’ current state of ICT readiness, which has fallen relative to its neighbors. 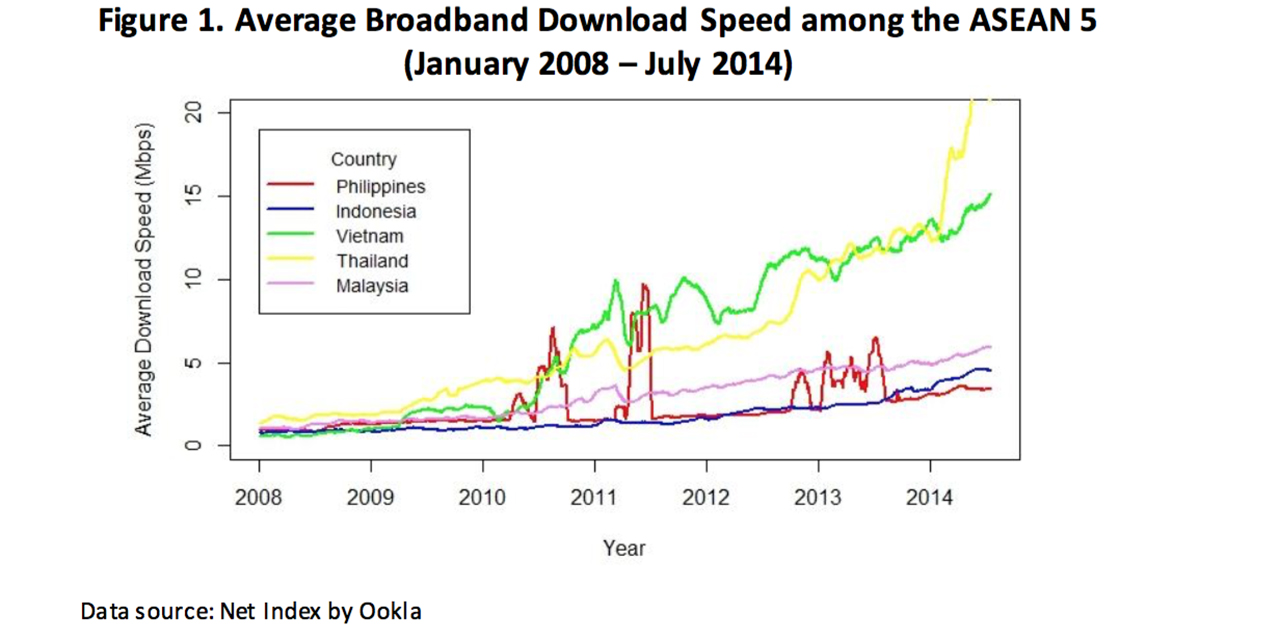 According to the United Nations (UN), the Philippines has also fallen 50 places in the E-Government Readiness Index since 2003.

Despite these, there are some tangible signs of ICT progress in the country. The standout sector in the economy, for instance – the business process outsourcing (BPO) sector – is built upon ICT.

What follows are selected highlights of how the authors believe the country could progress further in ICT, both from the standpoint of the public as well as on the regulatory side.

Walking through any mall throughout the country will be enough to convince anyone of the average Filipino’s predisposition towards technology. Smartphone sales are booming and the country has one of the highest social media penetration rates in the world.

Araral and Montenegro point out, however, that for the revolution to have any legs, Filipinos will need to grab the reins and participate in the innovation process.

“To ensure that all Filipinos have equal opportunity to participate in and benefit fully from the digital economy, we will need to re-orient the educational system to cultivate a new breed of creators, not just consumers, of technology,” the manifesto read.

In particular, boosting science, technology, engineering, and mathematics (STEM) education at all levels and increasing the number of STEM graduates are crucial as the country has fallen behind on these.

The key is focusing on teachers, because “compelling evidence from international experience indicates that teachers who possess strong content knowledge are the main determining factor behind high-performing students.”

ICT can also be incorporated into the learning process.

The authors pointed out that this can be done relatively cheaply and simply given the wide availability of free online courses, video conferencing, and mobile learning apps for adult continuing education, teacher training, and even parent training.

Internet access can be the strongest driving force for economic advancement, but it can also accentuate inequality. The country is doing reasonably well on the access front, but needs to ensure it gets to the lowest sectors of society.

The study noted that about 37% of the population or 36 million individuals reported using the Internet in 2013. For perspective, that figure is double that of neighboring Indonesia, but more still need to be connected to produce more benefits.

For example, in the Philippines, an investment of $1,000 in a device or Internet access would translate into an increase of $49,000 in an individual’s life-long earning potential.

Digital inclusivity would also translate into benefits beyond employability: tax revenues for the government, reduced dependency on social and health care programs, reduced chances of incarceration, and increased efficiencies in the delivery of government services.

In fact, a model developed by the authors of the study predicts that by targeting the approximately 12 million Filipino children under the age of 17 who are living in poverty, the estimated life-long benefits would total $59.3 billion.

Cost advantages and the cloud

As a developing country, cost still plays a big part in widening Internet access, and the expenses are magnified by the Philippines’ challenging geography.

There are factors, however, that work in the country’s favor, besides the rise of inexpensive smartphones.

Another factor the authors pointed out is that although inflation-adjusted US dollar prices for leasing local access circuits (broadband for business) have risen from 2006 to 2013, median prices across all bitrates (except for Ethernet) are still lower compared to Indonesia, Malaysia, and Vietnam.

The rise of cloud computing also helps in this regard as it allows for small and medium-sized enterprises (SMEs) to scale up, exponentially widening their customer base without the need to invest in physical infrastructure.

The manifesto noted that it would also help grow the digital service export market, especially around the ASEAN. In order for it to do so, though, the government will need to champion “friendlier skies.”

This means working closely with other countries to hammer out a harmonized ASEAN and international framework to facilitate the cross-border flow of data, while ensuring competition, transparency, and respect for data privacy.

Araral and Montenegro said that the government will need to speed up the implementation of its own data privacy law.

While they applauded the Data Privacy Act of 2012, they noted that the Implementing Rules and Regulations (IRR) has been stalled because the National Privacy Commission (NPC) has yet to be formed.

It also recommended that the government release spectrum, both licensed and unlicensed, to ensure the country meets the growing demand for wireless connectivity.

This spectrum, which includes unused TV channels, is very useful because the equipment is easy to set up and the signal can cover long distances, as demonstrated by Microsoft’s own collaboration with the Philippine government to reestablish critical communication by using TV White Spaces in Bohol, right after the 2013 earthquake, and in Leyte, in the aftermath of Super Typhoon Yolanda (Haiyan) that same year.

Most importantly, the government must strengthen regulatory institutions.

The authors noted that Philippines became an early adopter of e-government initiatives, ranking 6th out of 191 countries in a 2003 UN survey of government ICT adoption.

In 2014, however, the Philippines slipped to 51st place in electronic participation, while the country’s overall E-Government Readiness ranking plummeted from 45th to 95th place in the same year.

The study highlighted some cases that show tangible effects of increased government adoption.

At the national level, the Department of Budget and Management (DBM), through its Open Budget Initiative, is increasing budget transparency by providing detailed and timely information on public sector revenue collection and allocation.

The country ranked the highest for budget transparency in Southeast Asia, second in Asia, and 21st globally in the 2015 Open Budget  Survey.

On the local front, Valenzuela City was cited as an example. It set up electronic terminals, online billing and payment, mobile payment, and Geographic Information System (GIS) technologies to simplify and speed up its local permit application processes.

The study noted that investment in GIS was credited with increasing Valenzuela’s local tax revenues by more than 11 times the cost of its initial investment. The city has also seen an increase of more than 113% in new business registrations since 2004.

Initiatives like these coupled with Filipinos’ evident penchant for all things digital are encouraging signs.

The world is undergoing yet another economic revolution at the moment and although the Philippines is better placed than most to profit from it, the country has to follow through with bigger steps.

Whoever wins in May would do well to be mindful of that. – Rappler.com