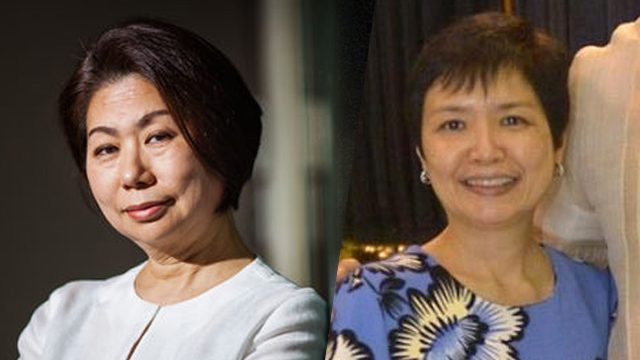 Facebook Twitter Copy URL
Copied
Robina Gokongwei-Pe is included in the elite list for the first time, while Teresita Sy-Coson makes it for the 5th year in a row

MANILA, Philippines – Robina Gokongwei-Pe and Teresita Sy-Coson, scions of two of the country’s richest men, are among the 50 women on Forbes Asia’s Power Businesswomen 2016 list.

This is the first time Gokongwei-Pe has been included on the elite list since its inception in 2012. Ranking 17th, she was cited for making Robinsons Retail Holdings the second-largest multiformat retailer in the Philippines.

The SM Group’s Sy-Coson, meanwhile, made it to the list for the 5th straight year, ranking 41st in 2016.

The 54-year-old president and chief operating officer of Robinsons Retail Holdings is the eldest of the 6 children of John Gokongwei Jr, who also landed on Forbes’ list of the world’s richest in 2016.

Her retail store now has 900 outlets ranging from supermarkets and department stores to convenience stores and drugstores, Forbes said.

“She worked her way up, as a management trainee, then cashier, store manager, buyer and merchandising head, before taking the helm in 2013,” the business magazine added.

Forbes also noted that with 8,500 employees and annual sales of $1.72 billion, Robinsons Retail Holdings was able to raise $621 million when it listed in 2014. This marked the country’s largest initial public offering in dollar terms.

Quoting Gokongwei-Pe, Forbes said she clung to her father’s wisdom “that women can be just as good in business as men opened the door to her success.”

In an interview with Forbes, Gokongwei-Pe said her experience of being kidnapped for one week during her college days “toughened” her.

The 65-year-old vice-chairperson of SM Investments and chairman of Banco de Oro (BDO) Universal Bank is the daughter of Henry Sy, who with $14.4 billion is the wealthiest in the Philippines, according to Forbes.

“I cannot say these are my achievements. They are collective achievements of those in our organization,” Sy-Coson was quoted as saying.

“I did not plan it. I would like to say it is perseverance and determination, but I think it is luck,” she told Forbes magazine.

The Forbes list acknowledges the inroads women are making in the business world.

To qualify, Forbes said candidates have to be active in the upper echelons of business in Asia, wield significant power, and have access to robust financial resources.

China and Hong Kong dominate with 14 women, followed by India with 8, Thailand with 5, and Japan with 4.

Singapore, Australia, Indonesia, and Vietnam each have 3, while South Korea and the Philippines each have two. Macau, Taiwan, and New Zealand have one each. – Rappler.com