Oct 3, 2012 9:42 PM PHT
Rappler.com
Facebook Twitter Copy URL
Copied
The CEO of Ayala-led Globe Telecom Inc. admitted that there are ongoing talks with the Lopez Group, which controls the leading media and cable industry players, for business synergies on top of their upcoming partnership on telecommunications MANILA, Philippines – The CEO of Ayala-led Globe Telecom Inc. admitted that there are ongoing talks with the Lopez Group, which controls the leading media and cable industry players, for business synergies on top of their upcoming partnership on telecommunications.

“We’ve always been talking. I cannot deny that Gabby (Eugenio Lopez III) and I regularly talk. We always talk on what do we partner with, the capabilities, what’s going on,” shared Globe president Ernest Cu in an interview with reporters.

Cu said they continue to explore opportunities that involve complementing their businesses amid changing consumer behavior and slow down in traditional telco growth services.

“It includes all forms of discussion such as discussions about Sky Cable, about ABS-CBN, about Bayan on how do we synergize them,” he added, referring to the cable, broadcast media, and the telecommunications units under listed conglomerate Lopez Holdings Corp (formerly Benpres Holdings Corp.).

When asked if they were discussing partnerships that could eventually lead to an acquisition by Globe of any of the conglomerate’s units, Cu replied, “all of the above. They’re all included.”

Cu went on to say that he and Lopez regularly have breakfast together every 3 months or so to discuss all forms of partnerships. “But the objective is to partner with someone who knows content and ABS-CBN is a fantastic content. The best content for Globe, better than GMA 7. Gabby knows his business,” he said.

The NTC said this will expand their network reach and service quality and address growing consumer complaints. Globe said this joint use will help it address increasing demand for voice, SMS and mobile data services. Bayan, on the other hand, can soon offer mobile services nationwide.

Rival Smart Communications Inc., which is led by businessman Manuel V. Pangilinan and a unit of PLDT, is contesting this NTC decision. 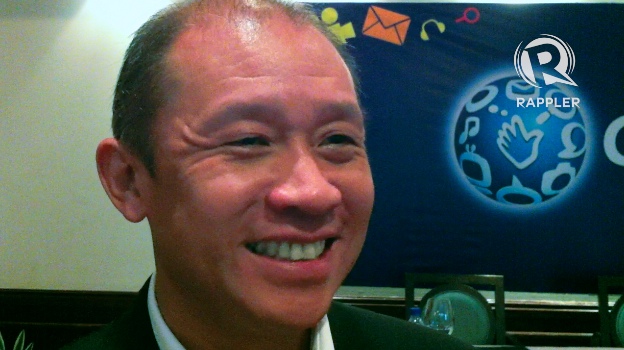 Globe is setting its sights on opportunities outside its traditional borders to create new areas of growth for its portfolio.

When Cu was asked earlier if Globe was also keen on making a similar move as the much-anticipated Pangilinan and GMA-7 deal, Cu replied, “absolutely.”

“Just like any other telco entity, we need to cover and make sure we have content relevant to the public,” Cu had said.

Cu said they are focused on providing content for their subscribers who have a “mobile surf snacking” behavior.

“What is attractive for us would be what the consuming public will use and they use mobile phones to browse a 5-minute clip rather than watch a one-hour show using a handset.”

“We are not here for the big screen,” he had stressed.

The 3 business groups — led by Ayala, Lopez and Pangilinan — have a past.

Years ago, both PLDT and Globe groups were interested to acquire Bayan.

Then saddled with debts after it couldn’t recover its investments in landlines, Bayan was left behind by industry peers that earned a windfall from text, prepaid, and bucket services.

The PLDT group had also planned to acquire a controlling stake in Bayan by swapping its shares in its unit Home Cable. Back then, PLDT president Napoloen Nazareno said that Bayan’s asking price was a “bit high.”

A unit of PLDT, on the other hand, had a minority stake in Lopez-led SkyCable, the country’s largest cable television service provider in Metro Manila and urban areas nationwide. The previous plan was to merge or swap stakes in both the cable units of the PLDT and Lopez group, but that, too, did not materialize.

Globe, on the other hand, had also explored acquiring Bayan but later backed out after the Lopez-led telco still had to secure approval from creditors. This complicated the negotiations, according to former Globe president Gerardo Ablaza.

When asked if talks are being revived for a possible acquisition of Bayan by Globe, Lopez Holdings president Salvador Tirona replied by text message: “We have always been open to discussions for partnerships and/or other ventures involving Bayan.”

“There are currently discussions on long term cooperation agreements, such as co-use, between Globe and Bayan,” he added. – Rappler.com