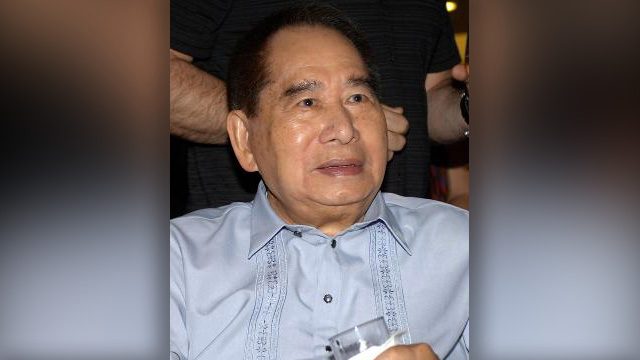 Back in April, Sy’s holding company SM Investments Corporation (SMIC) announced it is spending as much as P85 billion in 2016, mainly to build new malls as well as office and residential buildings in the Philippines.

SMIC was off to a good start this year, posting a consolidated net income of P15 billion from January to June. The growth was largely driven by the property side of the conglomerate, which accounted for 41% of net income, followed by banks with 38%, and retail with 21%.

“Sy’s family-owned SM Investments is now the largest retailer in the Philippines with stakes in banking, property, and retail,” Forbes noted.

“It announced in February 2016 that it is merging all its retail-related businesses under SM Retail; in March SM announced a partnership with Singaporean e-commerce company Lazada,” the magazine added.

Sy is also the only Filipino to land in Forbes’ list of the top 100 billionaires in the world this year, ranking 71st. When that list was released last March, Forbes said “volatile stock markets, cratering oil prices, and a stronger dollar” put a dent in fortunes around the globe.

Staying next to Sy on the Forbes list was JG Summit founder John Gokongwei Jr, who has a net worth of $6.8 billion, up from $5.5 billion last year.

Forbes noted that Gokongwei has developed JG Summit into the “Philippines’ fifth largest company with a market capitalization of $13.2 billion and diverse business interests including an airline, banking, food, hotels, power, chemicals, real estate and telecommunications.” Gokongwei-led Cebu Pacific Air saw its net income surge by P8 billion in the first 6 months of the year, after it breached the 10-million mark in passenger volume. Forbes said the biggest gainer on the list of richest Filipinos this year is Edgar Sia II, who ranked 17th with a net worth of $1.2 billion.

“The 39-year-old saw his wealth increase by 200%, thanks to DoubleDragon Properties, the fast-growing real estate development company he owns with Tony Tan Caktiong (No. 6, $4.3 billion),” said the magazine.

“Shares of DoubleDragon Properties soared by 350% due to strong rental revenues and growth of its CityMalls brand. The company announced in August 2016 that it was acquiring a majority stake in Hotel of Asia Incorporated,” Forbes added. As for the tycoon who suffered the biggest drop in net worth in terms of percentage, Forbes said it was Bienvenido Tantoco Sr.

Tantoco’s SSI Group, the country’s largest specialty store retailer, saw its net income decline by 58.8% to P241 million in the first half of the year. It had closed 81 shops as part of a store rationalization program.

Forbes said the newcomer on this year’s list is Ben Tiu, who ranked 44th with a net worth of $175 million.

“The eldest son of self-made steel magnate John Tiu Ka Cho took over TKC Metals in 1987 and led its entry into financial services with thrift bank Sterling Bank of Asia,” the magazine said.

“He also co-founded one of the country’s largest non-banking remittance companies, I-Remit.”

Here is a look at the top 10 on the Forbes list: The rest of the richest Filipinos – up to #50 – can be viewed here.

Forbes said the minimum amount required to make the list was $145 million, up from $120 million last year.

“The list was compiled using shareholding and financial information obtained from the families and individuals, stock exchanges, analysts and other sources,” the magazine added.

“Unlike the billionaire rankings, this list includes family fortunes, including those shared among extended families such as that of Lucio Tan and his relatives.” – Rappler.com