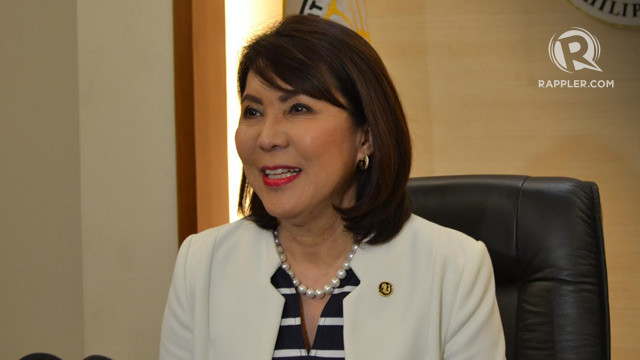 In an interview in her office in Makati City on Monday, August 29, Teo said Singson, along with major sponsors such as Philippine Airlines (PAL), SM group, Japanese casino mogul Kazuo Okada, and Solar Entertainment, will handle the financing aspect of the Miss Universe 2016 hosting – not the Philippine government.

“The group of Singson, with the help of Okada, Solar, PAL, and SM, will handle the finances. He is the one getting the commitment from sponsors, the business community. But in the end, the department will manage everything, from ensuring the security aspect to [preparing] the venues,” Teo told Rappler.

The head of the Department of Tourism (DOT) said that Singson bought “a private plane, a mega yacht, and luxury buses for the Miss Universe candidates.”

“There are actually lots of interested groups,” she added without divulging details.

To highlight tourist spots outside Metro Manila, Teo said the DOT and the New York-based Miss Universe Organization plan to fly some competitors to Davao, Iloilo, Vigan, and the beaches of Cebu for the pre-pageant events.

“For the photoshoot of [the] swimsuit competition, we are eyeing beaches in Cebu, but the main competition will be in Mall of Asia (MOA) Arena. For the culture or national costume, photoshoot will be in Vigan. We have spoken with Imee Marcos already and she agreed with us to send some candidates there,” Teo said.

The hosting of Miss Universe 2016 will “have a huge impact” on promoting Cebu as “a major international gateway,” she added.

“Instead of the popular Boracay, Palawan destinations, I would like to focus on promoting Cebu, because the President (Rodrigo Duterte) wants to promote Cebu as an international gateway as Manila is already overpopulated,” Teo said.

Citing the Miss Universe Organization, Teo said the pageant will bring 97 contestants to the Philippines, which in turn will have 50 guests each.

Teo said around 6 to 7 Asian candidates of Miss Universe 2016 will visit the country next month to promote the pageant.

She said the Philippine Arena in Bulacan was initially eyed as the main venue for the pageant, but “the Miss Universe Organization did not like it because of security reasons.”

The pageant was held in Manila for the first time in 1974, when Miss Universe 1973 Margarita Moran crowned Amparo Muñoz of Spain. In 1994, the pageant came back to the country, with India’s Sushmita Sen crowned by Miss Universe 1993 Dayanara Torres.

This coming January, the reigning Miss Universe, the Philippines’ own Pia Wurtzbach, will crown her successor. – Rappler.com