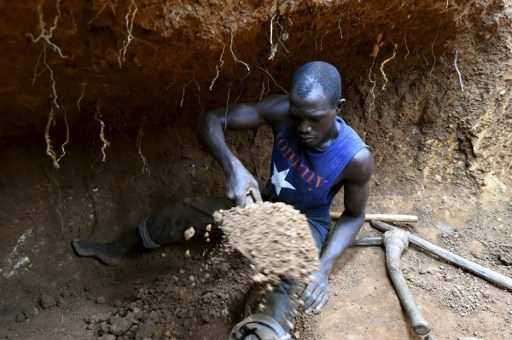 Facebook Twitter Copy URL
Copied
Ivory Coast is the world's leading cocoa exporter, but thousands of farmers there are now turning to unlicensed gold mines where they earn more

BOORE, Ivory Coast – Once a cocoa planter, Ferdinand Konan Yao has joined the ranks of fellow farmers who have abandoned Ivory Coast’s top cash crop to work in clandestine gold mines buried deep in the plantations.

“It hasn’t rained for more than 5 years and cocoa’s no longer worth anything,” said Yao, sporting a cowboy hat.

Ivory Coast is the world’s leading cocoa exporter but it is the prospect of striking gold that is luring diggers from neighboring Mali, Burkina Faso, and Guinea.

They come to seek their fortunes in dozens of small unlicensed mines scattered over a radius of more than 300 kilometers (185 miles) in the central Nzi-Comoe region.

The work has also attracted thousands of cocoa planters, whose forebears had accomplished Ivory Coast’s first “economic miracle” in the 1970s by hoisting the nation to top of the cocoa export list, ahead of other producers in Africa, Latin America, and Asia.

Each morning, small groups of “peasant-miners” head across the wooded savannah carrying pickaxes, shovels, and hoes to search for gold.

At work sites, broad trenches have been dug in the middle of plantations and uprooted trees lie in craters. The task of looking for gold is mobilizing all able-bodied people from the former “cocoa belt.”

At Boore, a village of 2,000 inhabitants in the central Dimbokro region, cocoa planter turned gold panner Octave Kouamee Konan openly regrets the destruction of an orchard.

“We were forced to do it,” says the father of 5 children, seated on a felled tree trunk. “We had to choose between dying of hunger or feeding the family.”

“In one week, I earn the equivalent of a year’s cocoa harvest,” he says.

Severe climate change that has struck the region is often blamed for the widespread abandonment of cocoa in favor of gold.

“Crops in this rich agricultural region are dependent on rainfall, which used to be abundant,” Felix Kouassi, departmental director of agriculture in Bocanda, a regional town of more than 200,000 people, told AFP.

“The seasons have been out of whack for several years,” Kouassi added. “In August we waited for the rains to get in a good harvest of yams and rice, but there has been none for several weeks.”

At the end of a working day, nuggets are sold on site to dealers from Burkina Faso, Mali, Guinea, and Lebanon for 20,000 CFA francs (about 31 euros) per gram. The earnings are shared out between the miner, the landowner, and the person who loans the tools.

While cocoa remains the main export commodity, Ivorian authorities are keen to develop the mining industry, which at present accounts for just 5% of the gross domestic product.

The country’s gold reserves are estimated at 600 tons, a figure that could be higher if prospecting by several companies bears fruit in the future.

But official production could be undermined by clandestine operations “on an enormous scale,” according to an expert who referred to a study currently under way.

“It’s a big challenge that Africa faces. Not only (Ivory Coast),” said Dennis Mark Bristow, the South African boss of Randgold Resources, whose company runs the largest mine in the country, at Tongon.

The biggest gold mine in neighboring Ghana, at Oboassi, has been closed because of damage done by clandestine activity, Bristow notes.

To prevent such trouble, the Ivorian government has launched a “national program for the rationalization of gold mining,” which led to the closure of 200 clandestine pits in the north and center of the country.

This program aims to “raise awareness among traditional chiefs and villagers who see gold washing as a source of income without evaluating the consequences,” Minister of Industry and Mines Jean-Claude Brou recently said.

Alongside government measures, industrialists plan a unit for small-scale gold production, with “allocated corridors” and “work under some kind of law,” Bristow said.

At present, illegal miners have turned from using mercury to cyanide in processing gold, he added. “They take the gold and leave the country. They are employing child labor, they don’t abide by labor laws.”

“It’s important to work not to criminalize the project but to normalize it,” Bristow added, stressing the commitment of mining firms listed on the London and New York stock exchanges to finding solutions and protecting the environment. – Rappler.com