Bank of Japan delays inflation goal in blow to ‘Abenomics’ 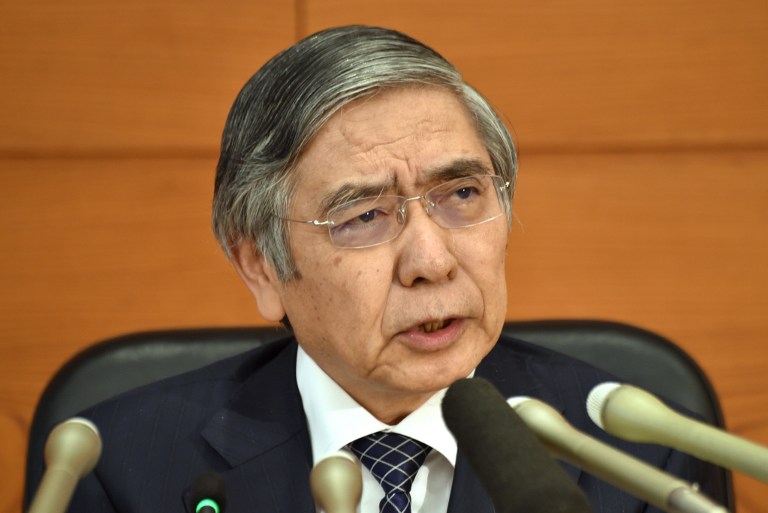 TOKYO, Japan – Japan’s central bank on Tuesday, November 1, again pushed back the timeline for hitting its inflation goal, the latest policy change that has raised questions about its attempt to revive the deflation-plagued economy.

The Bank of Japan has for more than 3 years embarked on a bond-buying stimulus program to try to keep interest rates ultra-low and increase borrowing and spending.

The scheme was introduced by BoJ governor Haruhiko Kuroda in conjunction with a government spending drive that Prime Minister Shinzo Abe hoped would drag the world’s number 3 economy out of years of torpor.

But in a fresh sign that authorities are still struggling, the bank said it now expects to hit 2% inflation by March 2019 – 4 years later than its original target and the latest in a string of delays.

It also leaves the next move up to Kuroda’s successor as the target date is almost a year after his term ends.

Kuroda on Tuesday denied there was any connection between the new target and his term, and blamed the BoJ’s failure to drive up prices on a drop in crude futures and weak demand overseas.

“Of course, it is extremely regrettable that the target was not reached in two years,” Kuroda told reporters, declining to comment on whether the government would look to extend his term.

The program sharply weakened the yen – fattening corporate profits – and set off a stock market rally that spurred hopes for a once-soaring economy caught in a deflationary spiral of falling prices and lackluster growth. (READ: Japan PM unveils $266B stimulus plan to boost economy)

But growth remains fragile while inflation is far below the BoJ’s target. Data last week showed consumer prices fell in September for a 7th straight month.

“What we’re seeing now is nowhere near what the bank had said would happen,” said Tsuyoshi Ueno, senior economist at NLI Research Institute in Tokyo. “Their initial projection was not very good.”

The BoJ hoped that consumers would spend more if prices were rising, persuading firms to expand operations and getting the world’s number 3 economy humming.

But wage growth has fallen below expectations, meaning workers have less money to spend. Abe’s promises to cut through red tape – the key 3rd plank of Abenomics – have also been slow in coming.

Japan’s central bank Tuesday cut back its consumer price forecast for the current fiscal year ending March 2017 and for the subsequent two years.

In September the bank revealed it would switch its focus to 10-year government bonds and pledged to keep its yield around zero, by buying as few or as many as necessary.

It said it would also cut back on the number of longer-dated bonds it holds to try to reduce the price of long-term securities. The plan is to increase their yield, marking the latest effort to persuade Japanese consumers that the price of goods and services will rise in the future.

But analysts said the move was an admission of defeat which highlights the limits of central bank power.

After Tuesday’s meeting the bank said: “Risks to both economic activity and prices are skewed to the downside.”

The bank did not alter monetary policy Tuesday, including its 80 trillion yen ($763 billion) annual asset-purchase program.

“However, policymakers are showing concern about the sharp moderation in price pressures, and we still expect further stimulus in coming months,” Marcel Thieliant from research house Capital Economics said in a commentary after the BoJ decision.

The economy contracted in the last 3 months of 2015, before bouncing back in January-March with a 0.5% rise quarter-on-quarter and then a 0.2% expansion in April-June. – Rappler.com