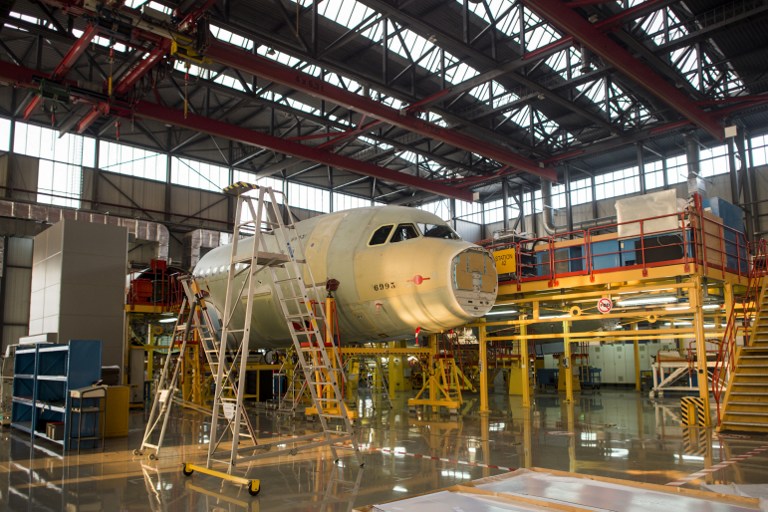 ZHUHAI, China – Aerospace giants Boeing and Airbus took potshots at one another at the Zhuhai air show, as the US and European rivals seek to capture more of China’s booming aircraft market.

China is one of the Western manufacturers’ key battlegrounds, with its travelers taking to the skies in ever-growing numbers.

The country’s airlines will need nearly 6,000 new planes worth $945 billion over the next two decades, Airbus said in its 2016-2035 Global Market Forecast.

Boeing’s expectations are even more optimistic, for 6,800 aircraft costing $1 trillion.

To win favor locally both have built partnerships with Chinese firms.

Airbus has a completion and delivery center in Tianjin, where workers install furnishings and apply paint to aircraft for the domestic market. It also buys parts such as exit doors, brake blades, and wing sections from Chinese suppliers.

Boeing is planning to open a facility with the state-owned Commercial Aircraft Corporation of China (COMAC) to paint and install cabins for 737-model planes, the Chinese firm said.

Eric Chen, president of Airbus China, dismissed the Seattle firm’s plan as “close to one generation” behind his own firm, saying it was following Airbus’s strategy “with a lot of reluctance.”

“I got two impressions,” he said at a briefing at the China Airshow in Zhuhai, the industry’s biggest event in the country. “First one, the decision we made 10 years ago was right. The second impression is that we are well in advance of our competitor.”

“The 787 is capable and has technology and features built into it that are not available on the A350, which was obviously introduced later into the market,” he said.

He added the company had 14 China deliveries of 787-9s in 2016 and had secured orders and commitments for 46 more.

While the two megafirms see a sunny future in China, homegrown competitors backed by Beijing aim to beat them at home – and ultimately abroad.

Chinese authorities have urged companies to acquire technology and skills in a range of high-value sectors including aerospace in the “Made in China 2025” plan.

At the same time as it is working with both Boeing and Airbus, COMAC is developing single-aisle jets to compete with them. Its C919 narrow-body is going up against the Boeing 737 and Airbus A320 in the 160-seat segment, which the Chinese company predicts will have more than 17,000 deliveries over the next 20 years.

In the summer COMAC’s regional jet, the 90-seat ARJ21, flew its first commercial flight after years of delays.

Boeing, Airbus, and Canadian regional builder Bombardier all played down the threat of Chinese competition.

But the business climate has darkened for US and European firms in the country, with the American Chamber of Commerce in China reporting this year that more than three-quarters of survey respondents felt “less welcome” there.

Pessimism among European companies hit an all-time high in the summer, according to a European Chamber of Commerce in China report on the “increasingly hostile” business climate.

In the short term, he added, foreign firms have little to fear from Chinese rivals in the developed countries that are their home market.

China has a history of adapting foreign technology with remarkable swiftness, turning from a buyer of Russian military aircraft to a producer of advanced stealth jets in 20 years. Its high speed rail and clean energy industries went from collaborators to competitors faster than global rivals anticipated.

But they are stuck between a rock and a hard place, he added, because shareholders want them to fight for Chinese market share.

“Even if they don’t come to China, there’s a good chance that if they are doing anything innovative it’s going to get stolen anyway, so the only thing they are doing is harming their revenue.” – Rappler.com