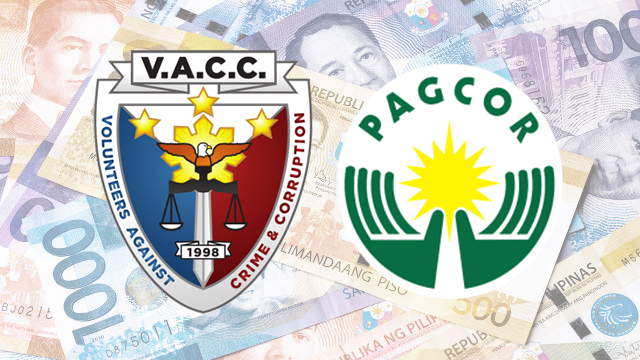 MANILA, Philippines – The Volunteers Against Crime and Corruption (VACC) added two more officials to the plunder complaint it filed in connection with an allegedly anomalous lease contract entered into by former executives of the Philippine Amusement and Gaming Corporation (Pagcor).

The VACC claimed it was Manalo who recommended awarding the project to Vanderwood Management Corporation (VMC) despite the non-submission of certain documents and non-compliance with some conditions indicated under the technical requirements of the bid to Pagcor’s Bids and Awards Committee (BAC).

Creencia, for his part, was the one who reviewed the lease contract and held that it “may be given due course.”

They join former Pagcor Chair Celestino Naguiat and 10 others in the complaint filed this October.

The case stemmed from what the VACC called an “irregular and anomalous” P3.2 billion lease contract Pagcor officials entered into with VMC for a non-existent casino gaming facility.

The complaint said the subject of the lease contract – a 6,500 square meter lot – was within the portion of the Museo Maynila Complex, formerly the Army and Navy Club, and is owned by the Manila City government.

The property, however, was leased by the city government to Oceanville Hotel and Spa Corporation back in January 2014.

The VACC, in its complaint, said P234 million was paid to VMC for 12 months advance rental and 6 months security deposit at P13,000,000 per month in accordance with the lease contract. The premises to be leased, however, did not exist at the time of the contract’s execution.

“Considering that there was no leased premises to speak of, the disbursement of P234,000,000 was irregular and, therefore, disallowable in audit pursuant to Commission on Audit Circular No. 2012-003 dated October 29, 2012,” it added.