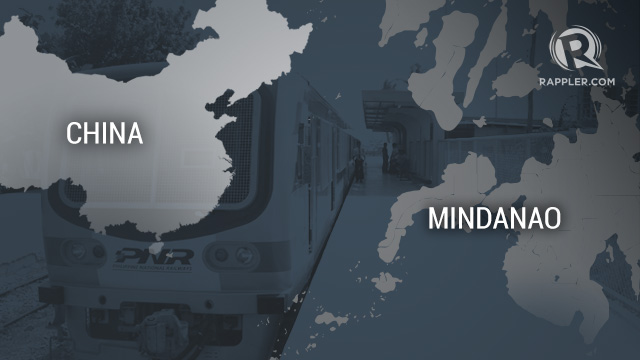 MANILA, Philippines –  The Philippine government plans to get official development assistance (ODA) commitment from China for at least 3 of its big-ticket infrastructure projects: the recently-approved Tutuban-Sorsogon train system, a maiden subway in Metro Manila, and a massive Mindanao railway.

“We think there is an excess capacity in China because there is not much infrastructure projects there. We are really shopping for nice projects. Not just a 4-kilometer railway or a 2-kilometer [train]. We should be ahead of demand,” Budget Secretary Benjamin Diokno said on the sidelines of the 22nd Association of Southeast Asian Nations (ASEAN) Transport Ministers Meeting in Pasay City on Thursday, November 17.

Tabled for discussion, among others, are the South Line of the North-South Railway Project (NSRP), the Mindanao Railway System project, and a Metro Manila subway, Diokno revealed.

One of the recently-approved projects by the National Economic and Development Authority (NEDA) Board, which is chaired by President Rodrigo Duterte, is the South Line of the NSRP.

The railway line that will connect Tutuban in Manila to Matnog in Sorsogon received a project cost boost from the NEDA Board. Diokno said the Tutuban-Sorsogon railway now costs “P250 billion to P260 billion,” from the initial estimate of P170.7 billion.

It was initially under the public-private partnership (PPP) thrust of former president Benigno Aquino III; but for faster development, the country’s budget chief said the government plans to get ODA commitment from either “Japan or China.” (READ: PH bids out biggest PPP: P171-B North-South railway deal)

The NSRP South Line deal will involve commuter lines connecting Tutuban to the southern peripheries of Metro Manila plus a long-haul network to the Bicol provinces, with an initial terminus in Legazpi City and a branch line eventually connecting Matnog, Sorsogon.

“Kami na lang magpapagawa (We will just be the one to develop it) just like the SCTEX (Subic-Clark-Tarlac Expressway) model,” Diokno said. The construction of the SCTEX was funded through ODA from Japan, while its operation and maintenance were auctioned off.

Diokno added that the massive Mindanao railway project (MindaRail) is also being studied as ODA-funded from China.

“I think this is also ODA with China. With the government, we can borrow with a lower cost, assuming there is no corruption,” Diokno said.

“[Unlike private sector], we (the Philippine government) don’t have return on investment priority. Them (private sector), they will add, say 15% additional cost – this is why projects become more expensive. So, I think, for most [projects], they (private investors) can just compete in managing these projects,” he added.

“This could be [implemented in] 3 phases. But the Northern Mindanao area will be the first one. We will try if it’s feasible. The road system in Mindanao is good,” Diokno said.

Asked if there are other big-ticket deals the government plans to get ODA commitment from China for, Diokno said a Metro Manila subway and bridges that will link the Visayas islands are also in the pipeline.

“There are many proposals, especially subways. The one in Metro Manila, we are considering that also,” Diokno added.

Noel Kintanar, transportation undersecretary for rails and toll roads, had told reporters that his department plans to revive the project to build a subway connecting the cities of Makati, Pasay, and Taguig. Under the Aquino administration, this project was supposed to go under the PPP route but was shelved due to timing issues.

“Also projects that will link the Visayas islands through bridges. Well, if there are unsolicited proposals,” Diokno said.

During the President’s recent state visit to China, the Philippine government was able to bring home a $9-billion loan deal from credit facilities to be made available for businesses, development projects, and infrastructure, among others.

During the state visit, around 17 memoranda of understanding were also signed by Chinese and Philippine firms. Some Chinese firms involved, however, have questionable track records. – Rappler.com