Facebook Twitter Copy URL
Copied
The local currency remains generally weak, slumping to its worst level since November 20, 2008 when it ended at P49.999:$1

MANILA, Philippines – The Philippine peso weakened further for the 5th trading session to an 8-year low on Tuesday, November 22, due to the lack of fresh leads domestically and abroad, as well as intensified concerns over the United States’ interest rate hike this December.

This was its weakest since November 20, 2008 when it ended at P49.999:$1 during the height of the global financial system meltdown.

“The peso just moved sideways today due to lack of fresh leads domestically and abroad. The peso remained generally weak still because of expectations of a US interest rate hike next month,” Guian Angelo Dumalagan, market economist at the Land Bank of the Philippines, said in an email interview.

“While the peso depreciated overall, it initially strengthened in the morning session due to profit taking,” he added.

US Federal Vice Chair Stanley Fischer has also appeared supportive of hiking the rate this December. The minutes of the US Federal Reserve meeting last September 20-September 21 revealed that several central bankers pointed out the need for a rate hike “relatively soon.”

The next Federal Open Market Committee (FOMC) meeting is set for December 13 and December 14.

“There might be a bias in favor of the peso, as likely softer US existing homes sales data could prompt investors to lock in the dollar’s recent gains,” the trader added. 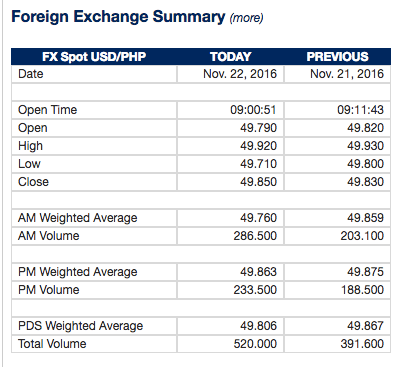 From now until the US monetary policy meeting in December, Dumalagan said “the dollar might remain above the P49 level due to rate hike expectations as well as political uncertainties in the US.”

“After the December meeting, the dollar could test the P50 dollar mark, especially if the US central bank pushes through with its rate adjustment and signals a faster pace of future monetary tightening,” he added.

Even after the December meeting, the “great uncertainty” over the US dollar’s trajectory would remain “as much of its future movement depends largely on the economic policies of the Trump administration,” Dumalagan said.

If US President-elect Donald Trump ramps up his country’s infrastructure spending, the trader said the dollar could breach the P50 mark, “as aggressive government spending could boost US inflation leading to potentially more US rate hikes next year.”

“However, if US spending plans are not as aggressive as expected, the dollar could depreciate, but might still remain above the P48 level due to safe-haven demand amid political uncertainties in the Philippines and the US,” he added. – Rappler.com