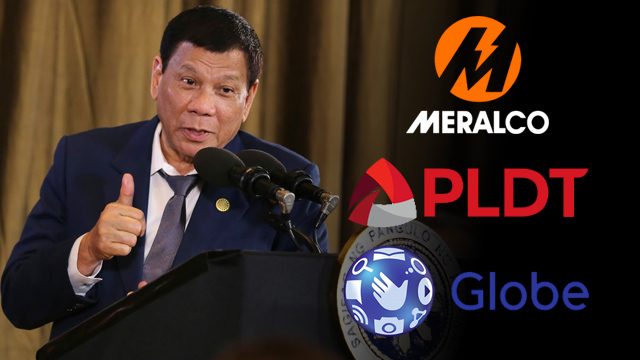 MANILA, Philippines – The country’s two telecommunications giants and the largest power service provider welcomed President Rodrigo Duterte’s pronouncements to open up the sectors to foreign players, as it will “benefit both consumers and the industries.”

PLDT Incorporated, Globe Telecom Incorporated, and Manila Electric Company (Meralco) said in separate replies that they are also aiming to improve their services and make these “more affordable.”

“We welcome this development. Vibrant competition will be good for the industry and the country,” PLDT director and head of Regulatory Affairs and Policy Office Ray Espinosa said in a mobile phone reply.

Globe senior vice-president for corporate communications Yoly Crisanto, meanwhile, said: “It is the call of the President what he believes will benefit both consumers and the industry. Globe was never against the entry of other players – whether foreign or local.”

“In fact, a recent study by the International Energy Consultants (IEC) said the country should focus on facillitating investments in new generation capacity to meet demand growth and promote competition,” Zaldarriaga added.

This was after Duterte said on Wednesday, November 23, that he would liberalize the telecoms and energy sectors. The President told local giants that he owed them no favor and it is high time to share the market with foreign players.

“I would like just to send this strong message: It’s about time that we share the money of the entire country and to move faster, make competition open to all,” he said after arriving home from the Asia-Pacific Economic Cooperation (APEC) Summit in Peru.

Changes in the 1987 Philippine Constitution?

But under the 1987 Philippine Constitution, only companies owned at least 60% by Philippine nationals or corporations may operate as a public utility.

Allowing foreign investors to set up a telecommunications or power company without partnering with a local firm would need amendments to the 1987 Philippine Constitution.

Japan-based NTT Group has been a strategic partner of PLDT since 2000, owning 20.35% of PLDT’s common shares as of end-September 2016.

Singapore-based Singtel, meanwhile, owns 20.13% of shares in Globe Telecom as of end-September 2016.

To potential investors, Duterte promised a reduction in red tape.

“If I wanted, just give the application to my office. I’ll bring it to the respective departments and I’ll pick up the results,” the Philippine President said in Filipino.

But should the telcos and energy firms significantly lower the cost of their services, Duterte said he would forget his statement.

“Now, if you make your price dive down, no problem, I will forget my statement,” he said in a mix of Filipino and English.

On PLDT’s part, Espinosa said his company is “investing massively to build the fastest and most advanced data-centric fixed and mobile networks in the country to deliver progressively better and affordable services.”

Globe has also increased its capital spending budget this year to expand its infrastructure. (READ: Globe Telecom hikes 2016 spending to over $1B)

For the Internet Society – Philippines, the “President’s decisive moves to fast-track regulatory and legislative initiatives will foster competition.”

“The Philippines has been falling behind for over a decade, and it is time for clear, positive action that will enhance business competitiveness and support national development,” said the group’s chairman, Winthrop Yu.

“Telco promos and promises do not constitute ‘improvement,’ ordinary Filipino people know this and are painfully aware of continuing poor and expensive Internet service from the dominant duopoly,” he added. – Rappler.com