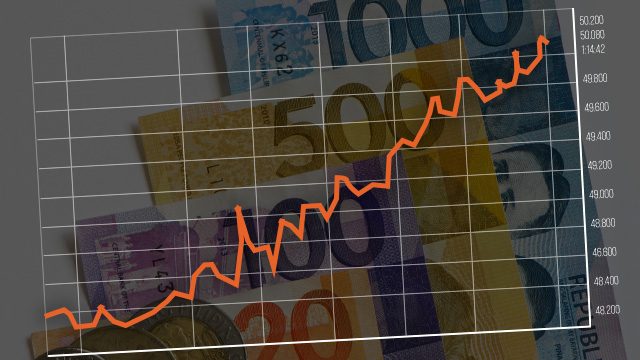 Facebook Twitter Copy URL
Copied
While the weaker peso means higher debt servicing for the government, it is 'positive' for some firms whose revenues are denominated in US dollars

MANILA, Philippines – The bottomline of Philex Mining Corporation and PLDT Incorporated is expected to be boosted by the weakening Philippine peso, which briefly hit its weakest mark in a decade, said its chairman Manuel V. Pangilinan.

It then closed to its fresh 8-year-low of P49.98:$1. Economists and traders expect the dollar to test the P50 mark, especially if the US central bank pushes through with its rate adjustment and signals future monetary tightening.

Although the depreciating peso means higher debt servicing for the government, a weaker local currency is “positive” for some firms whose revenues are denominated in US dollars.

“For PLDT, I would say neutral, if not mildly positive. We have a significant international revenue stream,” Pangilinan told reporters on the sidelines of the MVP Bossing Awards night in Taguig City on Wednesday, November 23.

PLDT Global, which covers its service overseas, expects its revenue to “do better than $50 million this year.” Of all his businesses, Pangilinan said Philex Mining is the “main beneficiary” of the depreciating peso.

“The main beneficiary is Philex, because all of its revenues are denominated in dollars so they generate around, give or take, $230 million. Revenues are all in dollars and everything’s converted to peso, their expenses is also mainly in pesos,” Philex Mining chief said.

Statistically, for every decline in the local currency against the greenback, Pangilinan said, “it raises the pre-tax income of Philex to the tune of around P200 million” annually.

The country’s largest gold and copper producer saw its net income attributable to equity holders of the parent increase by 59% to P1.36 billion in the January to September period from P851 million a year ago.

The weakening peso plus “slightly better production volume, better gold prices and… cost-cutting in cash expenses,” will result to favorable financial results by the end of the year, Pangilinan said.

But for his infrastructure conglomerate Metro Pacific Investments Corporation, Pangilinan said he expects the tumbling peso to have no impact on its bottomline.

Philex Mining, PLDT, and Metro Pacific are the key Philippine subsidiaries of Hong Kong-based First Pacific Company Limited, which are all chaired by Pangilinan. – Rappler.com