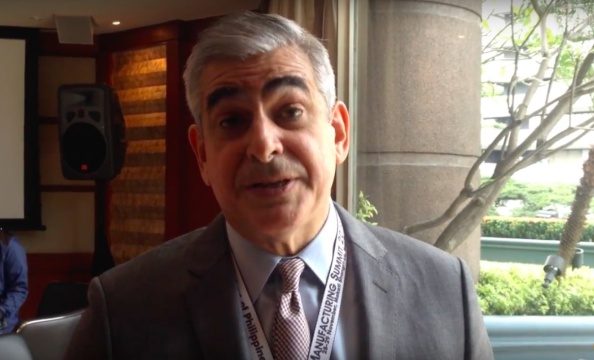 MANILA, Philippines – To carve out a niche in higher-value areas of automotive manufacturing in the country, Jaime Augusto Zobel de Ayala, the chairman and CEO of conglomerate Ayala Corporation, has asked the government to add new sweeteners into the Comprehensive Automotive Resurgence Strategy (CARS) and incorporate electronics in the program.

“CARS 2.0 is just a phrase. CARS is a good program. I was telling the Secretary, I use 2.0 as a phrase. What I mean is let us incorporate electronics in the program,” Zobel de Ayala said in a media roundtable in Makati City on Tuesday, November 29.

Signed by former President Benigno Aquino III on May 29, 2015, the CARS program provides incentives to car makers that locally produces at least 200,000 units of an enrolled model for up to 6 years.

The existing program, however, does not recognize electronics firms involved in car manufacturing.

For Zobel de Ayala, “there is an opportunity now to work hand-in-hand with the government to create a framework for CARS program that incorporates the changing nature of electronics in car manufacturing.”

With the rise of hybrids and electric cars and constant innovation in automotive systems, the Ayala chief pointed out that the current 40% share of electronics over the total cost of a car is estimated to increase to over 50% by 2025.

‘Build where you consume’

By including the electronics sphere in CARS program, Zobel de Ayala said the government will be able to attract more car manufacturers here.

“There is an emerging shift in supply chain strategy, where manufacturers are increasingly finding it more sensible to produce their goods closer to their core markets. This is also known as ‘nearshoring’ or build where you consume’,” he added.

“Three years ago, Lenovo set up a production line for personal computers in North Carolina to better serve its US-based customers. Inditex, which owns the Zara retail chain, keeps more than half of its apparel manufacturing within Spain, Portugal, and other nearby countries to allow its brand to respond better to fast-moving fashion trends,” Zobel de Ayala said.

Should the new sweeteners be imposed, Ayala-led Integrated Micro-Electronics Incorporated (IMI) is seen to benefit from the program.

IMI is a Philippine-listed global provider of electronics manufacturing services for the automotive, industrial, medical, and telecommunications industries.

“As a company, we don’t necessarily need that. As you can see, we are evolving. Many of our projects are not gonna happen here. It’s gonna happen in Bulgaria, Mexico,” the Ayala chief said.

“What Im saying is, I’m wearing my Philippine hat; let us also encourage the ecosystem to develop here. And if we don’t get incentives, it is okay. IMI is a global company, If they look at the industry and say it is an important one in the Philippines, we should create a framework for everyone to act in unison – from education to the training to the manufacturing incentives,” he added.

In response, Trade Secretary Ramon Lopez told reporters that his department “will look into” creating a CARS-type incentives program for electronics.

“We will look into that. As of now, step by step, we are thinking of CARS type in another sector. Directionally, we are looking at if this is an innovative sector. We will try to help,” Lopez said.

Albay 2nd District Representative Joey Salceda meanwhile said on the sidelines of an event on Tuesday, November 29 that he will propose incentivizing electronics providers in the next General Appropriation Act (GAA).

“I will propose that in the next GAA. Let us give them a training fee or incentives for every… 10,000 workers they employ,” Salceda told reporters.

For Zobel de Ayala, providing incentives should not be the focus.

“What I want is allowing the ecosystem to grow, encouraging players to take advantage of the electronics component. What’s happening in the CARS program is that it doesn’t recognize electronics in automaking,” he said.

The current CARS program provides auto makers and parts makers in the Philippines with P4.5 billion in annual support for 6 years starting 2016. – Rappler.com