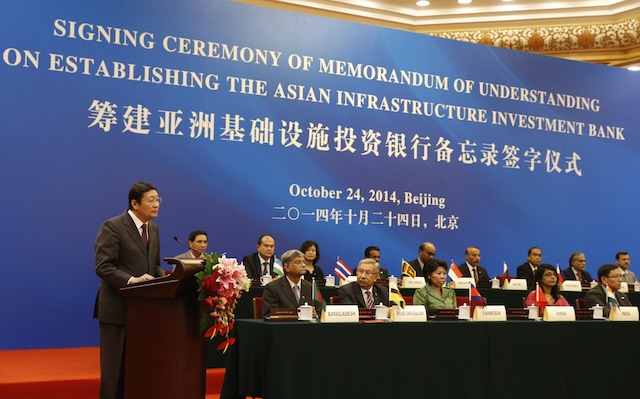 MANILA, Philippines – The Senate of the Philippines has adopted a resolution concurring to the ratification of the Article of Agreements of the Asian Infrastructure Investment Bank (AIIB) on Monday, December 5.

Senate Resolution No. 241, sponsored by Senate Committee on Foreign Relations Chairman Alan Peter Cayetano and co-sponsored by Senator Loren Legarda, was passed on 3rd reading with 20 affirmative votes, one negative vote and zero abstention. The lone no vote was cast by Senator Risa Hontiveros.

President Rodrigo Duterte ratified the Agreement on October 19, and submitted it to the Senate for concurrence.

Headquartered in Beijing and formally established late last year, the AIIB has 57 members, including Australia, France, Germany, India, South Korea, and Russia. Two notable omissions however are the US and Japan and the bank is seen by some analysts as a rival to the World Bank and the ADB

“The Agreement considers the importance of regional cooperation to sustain growth and promote economic and social development of the economies in Asia and thereby contribute to regional resilience against potential financial crises and other external shocks in the context of globalization,” the resolution read.

The resolution also stated that the Agreement “realizes that the considerable long-term need for financing infrastructure development in Asia will be met more adequately by a partnership among existing multilateral development banks and the Asian Infrastructure Investment Bank.”

Legarda earlier pointed out that full membership in the AIIB “could provide an annual infrastructure financing window to the Philippines of about $200 million to $500 million.”

Other benefits, she added, include gains from reduced trade costs of about 15.6% of trade value and a real income gain of about $220 billion if the infrastructure gap in the country is reduced, based on a 2009 report of the Asian Development Bank (ADB).

As part of agreeing to formally join the bank, the Philippines will have to put up capital of $196 million over 5 years which the government has until December 31 of this year to pay.

While waiting for the Senate’s concurrence, the country’s economic managers have begun setting the required funds in the government’s budget for 2017.

Legarda however pointed out that the country could see a 400% to 1,150% return on initial paid-up capital investment through the savings on loans for major infrastructure projects.

During the hearings which concluded last month, 8 departments and agencies of government endorsed the Agreement’s ratification. They are the following: Department of Foreign Affairs, Department of Finance, Department of Budget and Management, Department of Justice, Bangko Sentral ng Pilipinas, Bureau of Treasury, Bureau of Internal Revenue and the National Economic and Development Authority. – Rappler.com