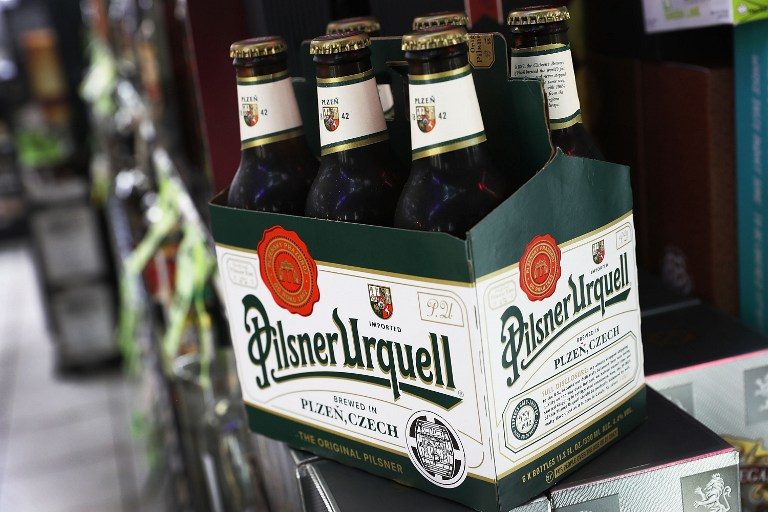 The takeover – also the largest by a Japanese beer company – includes popular Czech beer Pilsner Urquell and other businesses in Hungary, Poland, Romania and Slovakia.

In April, Super Dry-maker Asahi said it would buy the Peroni and Grolsch brands from the world’s top brewer AB InBev, clearing the way for the Belgian company’s monster $121 billion takeover of Britain’s SABMiller.

The European businesses that Asahi announced it was buying were formerly owned by SABMiller before it became part of AB InBev, which owns Corona, Beck’s, Budweiser and Stella Artois.

“The target business is highly compatible with our existing business in western Europe and will strengthen our business platform, allowing Asahi to grow sustainably across Europe,” the Japanese brewer said in a statement.

Investors, however, dumped Asahi’s Tokyo-listed shares in response to a report on the acquisition earlier Tuesday from Japan’s leading Nikkei business daily.

The paper said Asahi would pay roughly $7.7 billion for the units, about twice as much as it had said in an earlier report in October.

The stock dived 4.60% to end the day at 3,497 yen before the deal was officially confirmed.

“The shares were down over concerns about the price”, said Nobuyuki Fujimoto, a senior market analyst at SBI Securities in Tokyo.

“But in the longer term it could be a good strategy since Japanese brewers need to be in foreign markets to survive.”

Asahi has long been a minnow abroad – only about 12% of its 1.87 trillion yen in annual sales came from overseas consumers.

It is best known abroad for a beer brand called Super Dry, which debuted in 1987 at the height of Japan’s boom years, before a stock market and property crash ushered in a slow economic decline.

Japanese firms have been shopping overseas for years to counter a shrinking market at home and have faced a slump in beer sales as younger people lose interest in the country’s business drinking culture.

Kirin has also announced it was acquiring a 25% stake in New York’s Brooklyn Brewery, to tap into the global popularity of craft beers.

The two companies said they planned to form a joint venture in Japan next year to market Brooklyn beers in the country and then expand to Brazil.

In 2014, drinks giant Suntory said it would pay about $16 billion for the US firm behind Jim Beam bourbon in one of the biggest-ever overseas acquisitions by a Japanese company. – Rappler.com