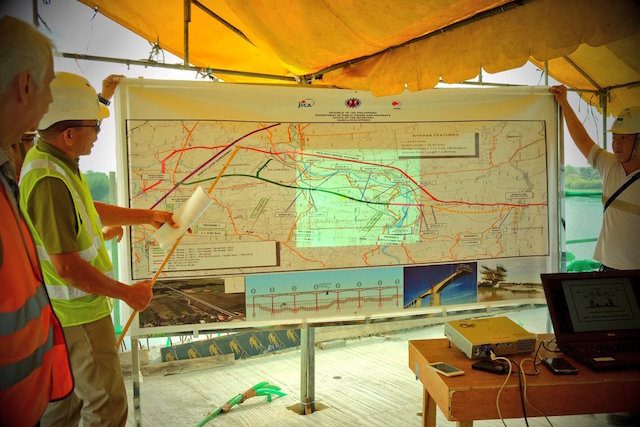 Facebook Twitter Copy URL
Copied
Construction is ongoing for Phase II of the Plaridel Bypass Road, which will link Central Luzon provinces to the North Luzon Expressway, cutting travel time by up to 50 minutes

MALOLOS, Bulacan – A 24.61-kilometer arterial road that will link the North Luzon Expressway (NLEX) with the Philippine-Japan Friendship Highway in San Rafael, Bulacan is expected to be completed by end-2017 or early 2018, officials said.

Construction is ongoing for contract packages 3 and 4 under Phase II of the Plaridel Bypass Road, which will link Central Luzon provinces to NLEX and is expected to cut travel time from Manila to Bulacan by 45 to 50 minutes.

Contract package 3, with a total length of 2.22 kilometers with 2 bridges, is expected to be completed on schedule by June 2017, Italian project engineer Giuseppe Mirabito said on Wednesday, February 22.

Meanwhile, contract package 4, with a total length of 7.74 kilometers, is expected to be completed early next year, instead of its original schedule of July 2018.

The contract packages are funded under a loan agreement between the Philippine government and the Japan International Cooperation Agency (JICA). The Plaridel Bypass Road is expected to boost economic activity around the northern suburbs of Metro Manila.

It will also alleviate traffic congestion at urban areas along the Philippine-Japan Friendship Highway road section from Plaridel to San Rafael, Bulacan, since the arterial road will bypass the town proper of Plaridel and the areas of Pulilan and Baliuag.

The Department of Public Works and Highways also said that Phase I of the project, completed in 2012, provided time savings of 20 to 23 minutes and benefited the towns of Balagtas, Bustos, Baliuag, Pandi, Plaridel, San Rafael, and Angat.

Once Phase II is completed by 2018, travel time savings will go up to 45 to 50 minutes. About 15,000 vehicles can be diverted to the bypass to decongest traffic at the Pan-Philippine Highway by 40%. – Rappler.com