PLDT still no.1 among mobile subscribers MANILA, Philippines – PLDT Incorporated is still the dominant telecommunications firm in the country in terms of mobile subscriber base, but its lead against rival Globe Telecom Incorporated continued to narrow in 2016.

“We have been losing subscriber base consistently over the last 8 quarters,” PLDT chief revenue officer Eric Alberto said in a briefing in Makati City on Tuesday, March 7.

He said one of the reasons for the continuous decline is the “cleaning up of inactive accounts.”

“The momentum of the decline is so strong that it will be difficult to reverse the total picture. What we are trying to do, at best, is we should be able to arrest the decline,” Alberto added.

As of February 2017, Alberto said PLDT’s mobile subscriber base increased to 63.17 million. 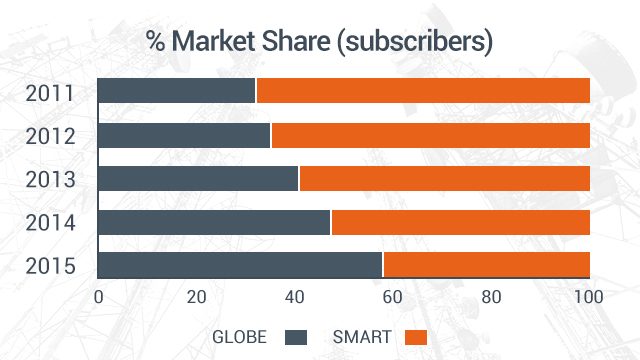 “As the chairman said, these are green shoots. Both revenue and subscriber count indicators are saying we are heading in the right direction,” Alberto said, attributing the slight increase to “a confluence of a number of things, including a good network.”

This was also reflected in PLDT’s financial performance in 2016.

PLDT saw its core net income plunge to P27.9 billion last year, down 21% from 2015, as revenues plunged and expenses jumped due to its digital pivot.

“This year 2016 has been a period for resetting of the many dials of our company, Profitability has been reset to a lower level, reflecting the impact of the changes in the business, our customer base, and our organization,” PLDT chairman Manuel V. Pangilinan said in the briefing.

Green shoots of recovery for 2017

For this year, PLDT expects its earnings before income tax, depreciation, and amortization (EBITDA) to grow by P8.8 billion, or to P70 billion from P61.2 billion in 2016.

The telco also aims to close 2017 with a higher recurring core income of P21.5 billion, from P20.16 billion in 2016, mainly due to the anticipated gain from asset sales in Beacon Electric Asset Holdings Incorporated by the first half of the year.

As it shifts its attention to the fixed-line segment, PLDT is pouring bulk of its capital spending budget this year into that market.

“In the course of capital expenditures budgeting this year, there is a greater proportion allocated in the fixed-line network. We want to make sure that the dominance of PLDT in the fixed-line side continues both on the fiber-to-the-home and on the copper side,” Pangilinan said. PLDT has earmarked a capital spending budget of P46 billion this year, P3.2 billion higher than in 2016.

“All told, I think you could see some green shoots of recovery. I don’t think we will be completely out of the woods yet. I think there are still lots of improvements to be done,” Pangilinan said.

“But the picture seems to be brighter for 2017 and the job of the management is to continue moving forward positively all the way up to 2019,” the PLDT chairman said. – with research from Sofia Tomacruz / Rappler.com