MANILA, Philippines – The Department of Trade and Industry (DTI) backs the revised proposal of the country’s economic managers to raise excise tax on new cars, especially on high-end models.

Trade Secretary Ramon Lopez said last week that his agency backs the plan of the Department of Finance (DOF) to raise excise tax on cars progressively, based on price brackets. That proposal includes a steep increase for cars priced at P2.1 million and above.

Auto industry stakeholders have expressed concern that such a tax would seriously hurt the luxury car segment, but Lopez pointed out that buyers at that level are not as price-conscious.

“Buyers in this market no longer ask what the price of a vehicle is because they can afford to buy it… The industry will not die,” he said.

“We really have to pass the comprehensive tax reform package… There will be a lot of good things that will happen if we do,” he added.

The DOF wants to raise automobile tax on all segments, starting with an increase of 2% on vehicles priced under P600,000 and rising from there. 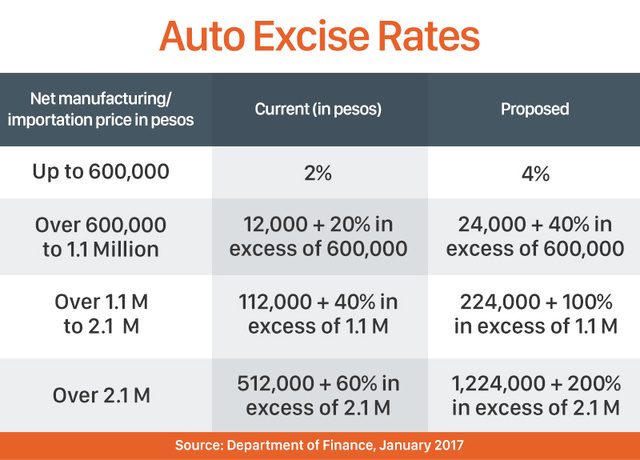 To illustrate the effect the new rate would have on the luxury segment, take a Toyota Land Cruiser SUV with a manufacturer’s suggested retail price (MSRP) of P4 million. From P4,455,000, the cost would increase to P5,360,130 with the new rate. The DTI chief also said the net effect of the excise tax hike on the actual sales price would be much lower, as the proposed rates are pegged on the import price.

“If the lowest tax rate on vehicles say under P600,000 would be 4%, the net effect on sales price is not 4% but just 2%. With amortization, buyers won’t really feel it. It would be like adding another P100 monthly, basically like one Uber ride,” Lopez explained.

He also dismissed the notion that the motive behind raising tax rates is to lessen the volume of cars on the road and improve traffic flow.

“There is no such [strategy]. The real solution to traffic congestion is not by reducing the number of vehicles but in building more bridges, roads, infrastructure, dispersal of industries away from Metro Manila,” Lopez said.

The proposed increase on excise tax for vehicles is one of the revenue-raising measures designed to offset the lowering of income tax in the DOF’s recently revised comprehensive tax reform package. The package is currently being debated in Congress.

The DTI would be particularly concerned about the new auto taxes’ effect on the auto industry as it has tagged it as a potential major source for foreign investment and also offered numerous incentives through its CARS program. – Rappler.com