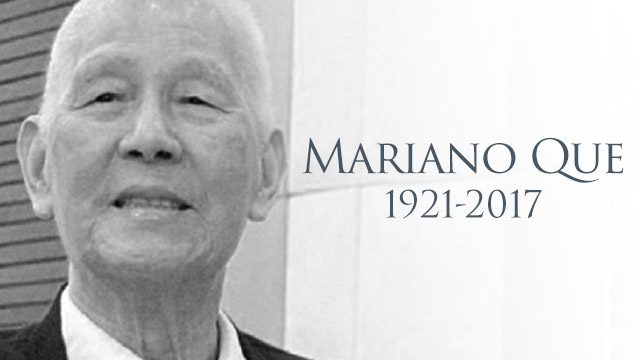 MANILA, Philippines (UPDATED) – From a wooden pushcart to 1,000 stores nationwide, the late Mariano Que peddled pharmaceutical products for Filipinos for over 7 decades, leading to the creation of the country’s largest drug store chain, Mercury Drug Corporation.

He was not born rich like other successful entreprenuers. Que came from humble beginnings. As a survivor of World War II, he was orphaned and was deprived of the chance to study early on.

The Mercury Drug founder, who just passed away, initially worked as an employee of a drug store chain during the pre-war era. After the devastation of World War II, Que knew Filipinos needed Sulfiathiazole – a “miracle” drug used to cure many diseases and illnesses.

But since pharmacies that time hardly sold Sulfiathiazole, Que then decided to invest his P100 to buy the drug and sell these in single doses to reach the poverty-stricken communities.

Selling Sulfathiazole by individual pieces, Que was able to save enough to open up the first outlet of Mercury Drug in Bambang, Manila on March 1, 1945.

Que set himself apart by building a reputation for quality products and fair prices in a market that was filled with sellers who sometimes sold fake, expired, out of date, or even dangerous medicines at exorbitant prices.

Mercury Drug remained a one-store operation till the 1960s, but Que started buying vehicles to deliver medicine to customers in 1948.

The nascent firm expanded in 1963, opening its second branch in the developing Makati central business district on the invitation of Ayala Corporation. It was then when Mercury Drug pioneered the self-service concept.

Mercury Drug expanded beyond Metro Manila in 1976, after it bought Medical Center Drug Corporation, which produces medical supplies and equipment.

It was in 2012 when Mercury Drug opened its first drive-thru service in Greenhills, San Juan.

Today, the firm has over 1,000 branches across the country having pioneered services like delivery of drugs and 24/7 operations which is featured in select stores. The University of Sto Tomas (UST) said in its official Facebook page that Que received an honorary Doctor of Humanities degree from the university in 2015. He was also recognized by the Philippine Retailers Association as the “Father of Philippine Health and Wellness Retailing”.

“While corporations tended to focus on gaining more and more profit, Que became one of the few who early on decided to give back to society,” UST Graduate School dean Marilu Madrunio said in her petition for the grant of the degree to Que.

UST Rector Fr Herminio Dagohoy also praised Que, saying his model of retail pharmacy “saved many lives and helped people – specifically those who survived the war – get back on their feet and rebuild.”

His daughter, Vivian Que Azcona, is now president of Mercury Drug Corporation. From her father’s P100-capital, she and her family now has a net worth of $900 million as of 2016, latest data from Forbes showed. Azcona is also one of the few women included in Forbes’ Philippines’ 50 Richest.

Mercury Drug Corporation did not give details about Que’s death, but it posted an advisory on its official Facebook page on Friday, April 14, requesting those who wish to send flowers to the Que family to instead just make a donation to their favorite charity.

Today, Que’s competitors, backed by other tycoons of Chinese origin, have been gaining significant market share in the pharmaceutical chain store industry.

The Sy family’s SM malls host some of the 4,800-plus* network of stores of pharmaceutical, health and beauty retailer Watsons.

The Ayala family has also joined the fray. Its unit, Ayala Health, is aiming to expand the Generika Drugstore network to 1,000 by 2020. – with research from Sofia Tomacruz/Rappler.com

Editor’s Note: In a previous version of this story we said SM malls host about 4,800-plus outlets of pharmaceutical, health and beauty retailer Watsons. The malls host only some of these.