MANILA, Philippines – Artificial intelligence (AI) – or as some call robotics – will become an alternative way for banks and even brokerage firms here to interact with their customers soon.

AI is already playing a role in consumers’ lives – be it through browsing recommendations on Netflix, talking to Siri, or even using a drone. But financial institutions here in the Philippines could be harnessing AI slower than organizations in advanced economies, a McKinsey & Company Manila executive said.

“Low labor costs here have historically incented companies to limit technology investments. For example, the Filipino banking industry invests 3% to 4% of its revenues in information technology (IT), considerably less than the 7% to 8% invested by banks in other countries in the region,” Suraj Moraje, senior partner and managing partner at McKinsey & Company Manila, said in his February 2017 analysis piece.

But it’s better late than never for Philippine lenders and other financial institutions. (READ: AI could be bigger threat than Trump to BPOs – analysts)

“AI is primarily being assimilated into our back offices’ processes. Right now, most of our shared service processes are running a 6-sigma program for most of our processes, like for example check clearing, vouching,” BPI executive vice president Ramon Jocson said last Thursday, April 20, on the sidelines of an annual stockholders’ meeting in Makati City.

The next step for BPI is to incorporate AI into some of its non-backroom processes.

Jocson said BPI is talking to two companies to take a look at two of its processes that are AI candidates. “These are the way we do vouching and reconciliation,” he added.

BDO has posted a job listing online for an AI engineer for virtual banking. The AI engineer’s reponsibilities will include laying the groundwork for the Internet of Things and machine learning as well as producing visualizations and reports for BDO’s transaction banking group. 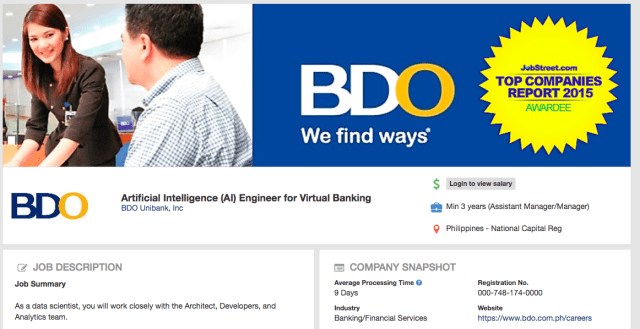 “AI brings a certain level of precision in the sense that you can do predictions and analytics on the most common errors and avoid them and then of course correct,” BPI’s Jocson said.

He said BPI is looking at using AI to eliminate the need to use employees to perform repetitive processes.

“As a bank, one of the things we’re after is really cost to income ratio… We basically work to make sure that our processes are very efficient. We do it once and accurately and AI will help us to do that,” Jocson said.

“The benefit also is that we can now move people up into higher-value jobs rather than repetitive ones.”

BDO Nomura is also studying how it could incorporate AI into its operations, according to its president, Koichi Katakawa.

“It is a good thing to do. We are considering it. An important aspect is we need to save costs,” he said.

Asked if this will displace existing brokers, Katakawa replied: “It will actually complement brokers. Of course, AI could only answer frequently asked questions but not the specific questions.”

He added the company will not need to spend beyond “a billion pesos” to adopt AI.

Jocson said BPI sees quite a few potential uses for AI in the medium term, which it will incorporate into its growing internet banking system.

“We’re rolling out a new internet banking system which includes a customer service hotline, although it is currently besieged with calls. You cannot plan for peak and so forth,” he said.

The bank, he added, is planning on using an AI program to act as a virtual gatekeeper that can sift through the more mundane issues and distinguish which customer problems require a live agent.

“International banks are already doing it and we’re going to do it also and so our internet banking system will have a virtual avatar which customers can ask questions to,” Jocson explained.

McKinsey & Company Manila said AI will soon be a measure of competitive advantage in the local banking scene.

“I think with the overhead associated with compliance, technology, service requirements, competition from FinTechs, you need size and scale [to compete with larger banks],” BDO president and chief executive officer Nestor Tan said in a press conference last Friday, April 21, in Makati CIty.

The BDO chief said the bank will invest heavily in technology and staff development to sustain performance in 2017 and beyond.

For BPI, AI could even be useful in performing surveillance on its automated teller machines (ATMs).

“We have more than 3,000 ATMS and 800 branches… So we’re putting an analytics program to flag aberrant behavior around these ATMs, like for example when a person loiters around an ATM,” Jocson explained.

McKinsey Global Institute (MGI) asserted that almost half of the activities people are paid to do globally – worth $16 trillion in wages – could be automated using robots, data analytics, artificial intelligence, and other existing forms of technology. – Rappler.com